Rebels holding 21 UN peacekeepers near the Israeli-occupied Golan Heights in southern Syria have said no talks were under way to free the men.

Their capture, just 1.6km from Israeli-held lines, is further evidence of how Syria's conflict could spill over into neighbouring countries.

The men are part of the UN Disengagement Observer Force (UNDOF), which has been monitoring a ceasefire line between Syria and Israel on the Golan Heights since 1974.

There was no indication that they would be released soon.

"There are no negotiations between any parties," said Abu Essam Taseel, from the media office of the Martyrs of Yarmouk brigade that captured the Filipino peacekeepers on Wednesday.

In several videos released yesterday, the peacekeepers said they were being treated well in the village of Jamla by civilians and rebels opposed to President Bashar al-Assad.

The United Nations said the captives had been detained by around 30 rebel fighters, but Mr Taseel said the men were "guests", not hostages, and were being held for their own safety.

However, he said they would only be released once Mr Assad's forces retreated from around Jamla and halted bombing there.

"Negotiations should be between [the United Nations] and the regime of Bashar al-Assad to stop the bombing and lift the blockade of the area so it can be safe," Mr Taseel said.

The Damascus government has not commented publicly about the incident.

Mr Taseel said the UN observers had a responsibility to keep heavy weapons out of the area.

Under an agreement brokered by the United States in 1974, Israel and Syria are allowed a limited number of tanks and troops within 20km of the disengagement line.

Mr Taseel said the Syrian military had exceeded those limits and that its warplanes were bombing opposition targets within 500m of the disengagement line.

A UN report in December said both the Syrian army and rebels had been present in the de-militarised area between Syrian and Israeli forces, and that Syrian army operations had "affected adversely" UNDOF operations.

Referring to incidents including shelling from Syrian territory last year, it said: "Recent incidents across the ceasefire line have shown the potential for escalation of tensions between Israel and the Syrian Arab Republic, and jeopardise the ceasefire between the two countries."

In January Israel bombed an arms convoy in Syria, which may have been destined for its Lebanese foe Hezbollah, diplomats and security sources said.

Israel has said it will not "stand idle" if violence spreads to the Golan, which it captured in 1967.

The Israeli army said eight UNDOF soldiers were "evacuated into Israel" from their lookout post this morning, but gave no reason for the move.

The UN says around 70,000 people have been killed in Syria in the past two years.

An uprising that began with mainly peaceful protests against Mr Assad in March 2011 has spiralled into an increasingly sectarian armed conflict. 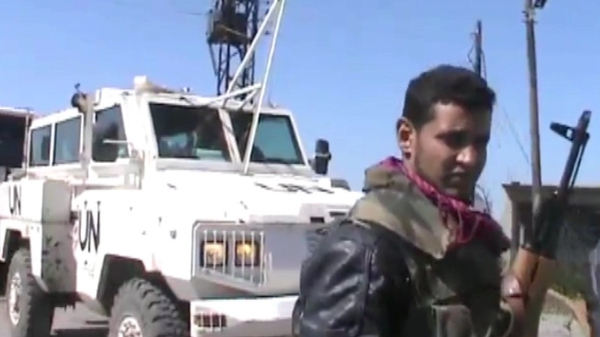