Algeria's Tiguentourine gas plant resumed some production this morning, just over a month after dozens of foreign workers were killed in an Islamist attack there.

The gas facility had been closed since gunmen attacked it on 15 January and seized hundreds of hostages before the army stormed in four days later.

"It is a partial resuming of production ... we will get 3 billion cubic metres per year," Sonatrach chief executive Abdelhamid Zerguine was quoted as saying by state radio.

The plant, operated by BP in partnership with Norway's Statoil and Algerian state energy firm Sonatrach, produces about 9 billion cubic metres per year of gas, about 11.5% of the country's annual total.

Algeria is a top energy supplier of gas to Europe, and a key US ally in its fight against al-Qaeda in the Sahel region of north Africa.

The attack on the plant was led by rebels loyal to senior al-Qaeda member Mokhtar Belmokhtar.

37 foreign hostages, and 29 rebels were killed during the assault on the plant, 50km from the town of In Amenas, near the Libyan border.

When journalists visited the site two weeks after the attack, the marks of hundreds of bullets and several grenade blasts scarred the concrete walls of some of the single-storey villas where foreign employees lived, and where some had died.

Local workers in anti-contamination suits were still labouring on the clean-up operation.

A conflict in the 1990s between security forces and Islamist insurgents, which killed an estimated 200,000 people, still casts a shadow over Algeria.

The fighting started after the military-backed government annulled an election which hardline Islamists were poised to win.

Violence has sharply diminished but a hardcore of militants affiliated to al-Qaeda continues to strike in remote areas in the north of the country.

Twelve militants have been killed by government forces during the past 48 hours in the northern regions of Boumerdes and Chlef, a statement released by the Ministry of Defence said.

160 insurgents have been killed in Algeria since June 2012, including the 29 who launched the attack against the gas plant, a security source who asked not to be named told Reuters. 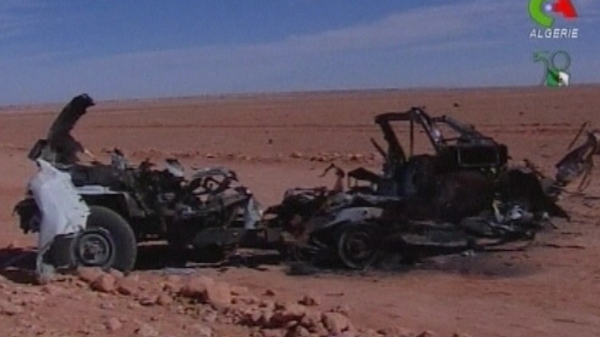