Saudi Arabia and Qatar have expressed alarm at the rise of al- Qaeda aligned group al-Nusra front in Syria.

The two Gulf Arab states rooting for President Bashar al-Assad's overthrow appear to be chafing at Western pressure to keep out of the fight.

They argue that building ties through aid and advice to favoured opposition groups is the only way to ensure other, hardline Islamist factions are sidelined.

The US and Europe want to avoid arming rebel militias for fear that weaponry will find its way to ultra-orthodox Sunni Muslim groups close to jihadis like al-Qaeda.

President Assad cites such militants, often seen as the most effective fighters on Syria's battlefields, to justify using relentless force in a two-year-old war that has cost some 70,000 lives.

Attacks carried out by such groups against the Alawite minority, an offshoot of Shia Islam that dominates Syria's power and security structures, have aggravated sectarian rifts in many Arab states including some in the oil-rich Gulf.

The US in December listed the al Qaeda endorsed al-Nusra Front in Syria as a terrorist group.

But Saudi Arabia and Qatar are signalling that the longer the war drags on, the stronger such hardliners will get, while other groups will likely struggle if denied meaningful aid, according to a Gulf Arab official, analysts and diplomats.

A Gulf Arab official said it was vital to build ties to non-Qaeda rebel groups to strengthen them now and in any future fight for power in a post-Assad Syria.

Mustafa Alani, a Gulf-based security analyst, said arms were now more available in Syria and what such groups needed most was non-lethal aid such as food and medical aid for their families.

Gulf Arabs are not bound by US and EU arms embargoes on Syria, and some analysts allege they supplied weapons to Syria last year, probably through tribal and smuggling connections in Iraq.

But Saudi Arabia and Qatar have signalled any support would be much more effective if Western powers lent political backing, coordination, equipment and advice.

Western nations are mindful of how weapons spread from Libya after its Western-backed revolt in 2011 to unstable nations such as Mali.

Concern has been voiced over the inability to distinguish militants from moderates in the disorganised array.

Not all Gulf Arab states are eager to arm Syrian rebels, but all fear possible "blowback" if their own nationals go to fight in Syria and one day come home and launch a jihad for a purist Islamic state.

The al-Nusra Front has ideological overlaps with al-Qaeda, which has sworn to topple the Saudi ruling family.

This was a factor in the creation of al- Qaeda and in the last decade they turned a blind eye to clerics who urged Saudis to join an anti-US jihad in Iraq.

In 2003 Saudis who had fought in both conflicts launched attacks at home, drawing a tough security response from Riyadh.

Earlier, an air raid on a suburb of the Syrian capital killed at least 20 people, while a footballer died after two mortars exploded next to a stadium in Damascus.

The Britain-based Syrian Observatory for Human Rights said the raid on Hamouriyeh killed 20 and other people were feared buried under debris.

Another activist group, the Local Coordination Committees, put the death toll higher, saying up to 35 were killed and dozens more were wounded.

Damascus has largely been spared the violence that has left other cities in ruins.

However, in recent weeks rebels who established footholds in the Damascus suburbs have clashed with government forces, moving from the east and south into the centre of the capital.

The observatory also said rebels shot down a government fighter jet in the Damascus suburb of Douma. 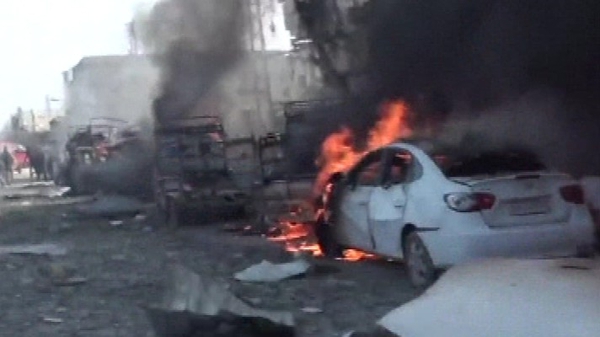 UN says over 60,000 killed in Syria's uprising and civil war