Minister for Justice Alan Shatter has said the Government will make very specific announcements in the Dáil on Tuesday to address the issues raised in the Magdalene Laundries report.

Speaking on RTÉ's This Week, Mr Shatter said the Government was working on producing a comprehensive package of measures on the issue.

The Dáil will debate the report next week.

The report found there was significant State involvement in the Magdalene Laundries, which were run by Catholic nuns.

Minister of State Kathleen Lynch has said the type of package that will be provided to the Magdalene Laundry survivors will have to be done on an individualised basis.

She said some women will not need any help in relation to housing, others have health needs, others psychological needs, others financial needs.

The minister was reluctant to reveal what is in the package, but said each woman has to be dealt with on an individual basis.

She said: "The Government has decided that a person with competence and compassion, and the expertise in this area will be asked to deal with this issue.

"That person will be asked to put together a framework where women can interact with that person and their team, and we will then look at what needs to be put in place."

She said the religious orders will have to be part of the process and they will be contacted on this issue in the very near future.

The minister said the Taoiseach was moved by the stories he heard in London yesterday. She said the women themselves have said that he is a compassionate and kind man.

She said: "The Taoiseach, Alan Shatter and myself did not say very much, we simply listened to what the women have to say. That in itself, I think, was quite good for them. But it was good for the Taoiseach to put a face to the story to a great extent." 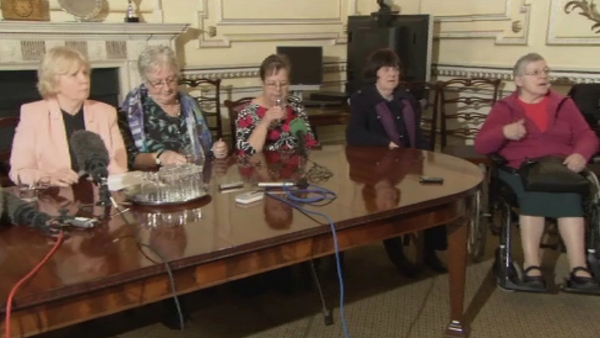