The Dáil is debating emergency legislation to wind up the Irish Bank Resolution Corporation from midnight.

TDs had been due to begin the debate at 10.30pm, but this was delayed by a half an hour as the draft legislation was circulated and opposition parties briefed on its contents.

The Dáil was then adjourned until midnight to allow members to read the Bill.

According to the Explanatory Memorandum, the aim of the Bill is to wind up the IBRC, end the exposure of the State to the IBRC, help to restore the financial position of the State, and help to enable the State to re-establish normalised access to the international debt markets.

It says that the Minister for Finance shall, after the legislation is passed, make a "Special Liquidation Order" to wind up IBRC and that, after this Order is made, no person can apply to wind up or appoint an examiner to any subsidiary of IBRC without the consent of the Special Liquidator.

The board of the IBRC, formerly known as Anglo Irish Bank, has been stood down ahead of the Dáil debate.

The functions of the board will now be carried out by accountancy group KPMG.

It is understood that the Government ultimately plans to liquidate the bank and Irish Nationwide Building Society as part of a deal to restructure the promissory notes used to bail out the two institutions.

It is thought the promissory note would be replaced with a number of bonds that would reduce the burden on the State.

A spokesperson for the ECB has told RTÉ News that talks on a possible deal on Anglo promissory notes were continuing in Frankfurt.

Earlier, the Cabinet met to discuss the legislation ahead of the Dáil debate.

KPMG's Padraic Monaghan has been given responsibility for running IBRC's board, but has not been appointed liquidator, a source familiar with the situation told Reuters.

Staff at IBRC were informed of KPMG's appointment by email this evening.

Under the Government's plan, IBRC's assets would be transferred to the National Assets Management Agency.

The promissory note would be replaced with a number of bonds, which would have an average maturity of 27 years.

The bonds' maturities would range from 25 to 40 years.

The €3.1bn in annual repayments due under the promissory note would be replaced with significantly lower, interest-only repayments.

In addition to ECB support, the plan also depends on the Irish Central Bank holding onto the new long-term bond for some time before selling it on to the markets.

Central Bank Governor Patrick Honohan, Ireland's representative on the ECB's Governing Council, was to put a revised plan to his fellow central bank governors this evening in Frankfurt, a source said.

The union representing workers at IBRC said it would be seeking an urgent meeting with Minister for Finance Michael Noonan and IBRC’s proposed liquidators.

Larry Broderick, of the Irish Bank Officials' Association, said around 800 people are employed by IBRC and many are employed on permanent contracts.

He said staff were "shocked" at tonight's developments. 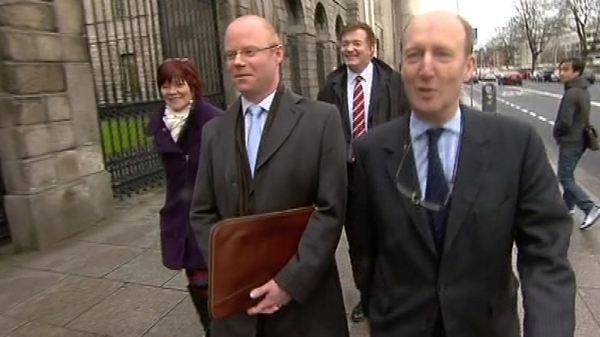