The production of burgers at the Rangeland Foods processing factory near Castleblayney in Co Monaghan is expected to resume shortly.

Following an audit by officials from the Department of Agriculture, the company has now been cleared to resume producing burgers for the domestic and international markets.

The company had suspended production after horse meat was found on the premises.

Meanwhile, Poland's Chief Veterinary Officer has written to Irish authorities seeking access to the information which led them to conclude that beef products imported from Poland were contaminated with horse  meat.

His statement outlines how checks were conducted at three factories supplying the raw material and five slaughterhouses in Poland.

The analysis showed no meat, other than beef, had been sent to Ireland.

It also disputes information given by Minister for Agriculture Simon Coveney about both the method and timing by which he was informed about the matter.

Dr Zwiazek also contested the suggestion that information about the problem had been placed on the Rapid Alert System for Food and Feed (RASFF) last Saturday.

He has asked for samples to be re-tested in the presence of the Polish companies affected and the Polish Veterinary Inspectorate.

Responding to the statement, IFA President John Bryan said: "I'm not totally surprised because naturally every country comes to their own defence in the initial investigations.

"This has dragged on much longer than I would have liked. This whole horse meat saga, imported product, should never have happened."

Elsewhere, the Garda Commissioner has said officers from the National Bureau of Criminal Investigation are involved in the investigation into the discovery of horse DNA in beef.

Martin Callinan said he hoped it would be a short investigation and that the Special Investigations Unit would get to the root of the problem very quickly.

He said gardaí were at present assisting the lead agencies, the Department of Agriculture and the Food Safety Authority, with their inquiries, but if any evidence of criminality emerged gardaí would take a leading role.

He said gardaí were not specifically investigating any particular offence at the moment and have not carried out any searches or made any seizures.

He also said that the Fraud Bureau would be brought in if evidence of fraud emerged.

Meanwhile, British supermarket chain Asda has withdrawn burgers produced by the Newry company caught up in the horse meat controversy.

Freeza Meats yesterday confirmed that it had stored a meat consignment belonging to Monaghan-based McAdam Food Products. The consignment was found to contain 80% horse DNA.

An Asda spokesperson said that even though testing had shown horse meat was not present in Freeza Meat's products, Asda wouldn't "take any chances" when it came to the authenticity of the ingredients in its products.

Asda has removed four types of frozen burger products from its shelves.

It says it has instructed Freeza Meats to segregate and hold any frozen burgers currently in production or in their supply chain destined for Asda.

The Irish Cattle and Sheep Farmers' Association has said that major retailers should take some responsibility for their involvement in the horse meat controversy.

Speaking on RTÉ's Morning Ireland, ICSA Beef Chairman Edmond Phelan said some damage had been done to the reputation of the Irish processed food sector as a result of horse meat being discovered in frozen beef burgers.

He said: "If the major retailers - I mean they can't wash their hands of it either - if they want to buy food for practically nothing, they have to take some responsibility."

McAdam Foods said it had purchased products on the basis they were beef and nothing else.

The company said it was shocked that horse meat was identified in products it imported and supplied to other companies.

The ABP Food Group, which is owned by Larry Goodman, has confirmed that one of its plants, Silvercrest Foods, had bought about 170 tonnes of Polish beef product from McAdam Foods last year. 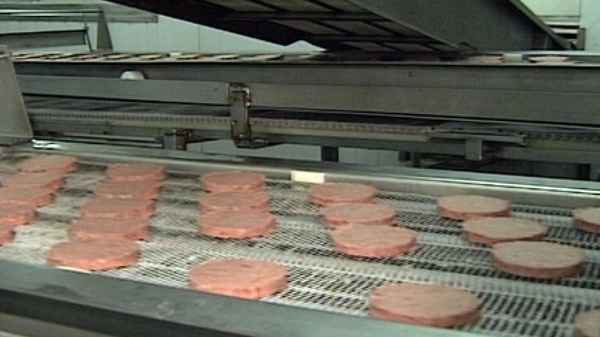