France plans to begin pulling troops out of Mali from March and will focus its operations on flushing out Islamist rebels in the north of the country, Foreign Minister Laurent Fabius said.

"We will continue to act in the north where some terrorist havens remain," Mr Fabius said in an interview for tomorrow's Metro newspaper.

"I think that from March, if everything goes according to plan, the number of French troops should fall."

Meanwhile, troops from France and Chad have moved into Kidal in an effort to secure the strategic north Malian city.

Troops have had control of the airport for several days.

The French-led military intervention against advancing Islamic fighters started more than three weeks ago and has pushed quickly into Mali's north.

France's government fears the region could become a haven for international terrorists.

The French last week began a campaign of airstrikes on Islamic rebel outposts around Kidal and Tessalit.

France has also ramped up its presence in Mali to 4,000 troops.

As French forces focus farther north, they are preparing to hand control of Timbuktu to African forces this week.

Some 3,800 forces from other African states are in Mali backing up the weak Malian army, the official said.

But it is not clear that the African forces are ready to take full responsibility against the Islamic extremists, who may strike the cities from their desert hideouts.

The spokesman for the Malian military in Timbuktu, Captain Samba Coulibaly, said there is no reason for the population to fear the withdrawal of French troops.

"With the size of the force we have here right now, we can maintain security in the town of Timbuktu," he said.

"The departure of the French soldiers does not scare us, especially since their air force will still be present both in Timbuktu and Sevare.

"They control this entire zone and can intervene within a matter of minutes in order to carry out airstrikes as needed," he said.

Meanwhile, secular rebels from Mali's Tuareg group say they have arrested two Islamic extremists, including the man blamed for enforcing stoning deaths and amputations in Timbuktu.

A statement from the National Movement for the Liberation of Azawad yesterday said Mohamed Moussa Ag Mohamed of Ansar Dine and Oumeini Ould Baba Akhmed of the Movement for Unity and Oneness of the Jihad, or MUJAO, were arrested on Saturday near Mali's border with Algeria.

The NMLA launched a rebellion last year and seized most of northern Mali. They initially fought alongside Ansar Dine and MUJAO but they soon hijacked the Tuareg nationalist uprising.

The NMLA said the two men have been interrogated and information shared with French troops. The claims of these arrests, however, could not be immediately confirmed. 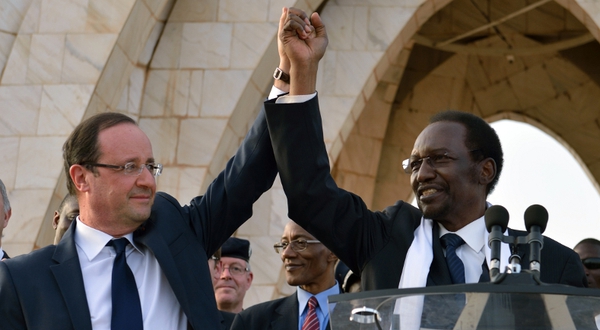 French troops to remain in Mali until sovereignty is restored