German Chancellor Angela Merkel has urged the Egyptian president to open a dialogue with all political forces after a week of violence that has killed more than 50 people.

President Mohammed Mursi flew to Germany to try to convince Europe of his democratic credentials.

However, in a sign of the political tensions back home, he restricted his trip to a few hours and cancelled a planned Paris leg.

"One thing that is important for us is that the line for dialogue is always open to all political forces in Egypt, that the different political forces can make their contribution, that human rights are adhered to in Egypt and that of course religious freedom can be experienced," Ms Merkel told Mr Mursi at a joint news conference.

The Egyptian leader, who has faced months of protests by liberal and youth groups opposed to a new Islamic constitution, replied that dialogue was possible and that Egypt would be a state based on the rule of law, not run by the military.

But he refused to give a commitment sought by the opposition to form a national unity government, saying that would be for the new parliament to decide after elections expected in April.

Two more protesters were shot dead before dawn near Cairo's central Tahrir Square on the seventh day of what has become the deadliest wave of unrest since Mr Mursi took power in June.

Opposition politician Mohamed ElBaradei called for a meeting between the president, government ministers, the ruling party and the opposition to halt the violence.

But he also restated the opposition's precondition that Mr Mursi first commit to seeking a national unity government, which Mr Mursi has so far rejected.

Mr Mursi's critics accuse him of betraying the spirit of the revolution by keeping too much power in his own hands and those of his Muslim Brotherhood, the Islamist movement banned under Mubarak which has won repeated elections since the 2011 uprising.

The unrest has prevented a return to stability ahead of new parliamentary elections due within months, and worsened an economic crisis that has seen the pound currency tumble in recent weeks.

The worst violence has been in the Suez Canal city of Port Said, where rage was fuelled by death sentences passed against soccer fans for deadly riots last year.

Mr Mursi responded by announcing on Sunday a month-long state of emergency and curfew in Port Said and two other Suez Canal cities.

Protesters ignored the curfew and returned to the streets on Monday, although the streets grew quieter yesterday.

Germany has praised Mr Mursi's efforts in mediating a ceasefire between Israel and Palestinians in Gaza after a conflict last year, but became concerned at Mr Mursi's efforts to expand his powers and fast-track a constitution with an Islamist tint.

Berlin was also alarmed by video that emerged in recent weeks showing Mr Mursi making vitriolic remarks against Jews and Zionists in 2010 when he was a senior Brotherhood official.

Germany's Nazi past and strong support of Israel make it highly sensitive to anti-Semitism. 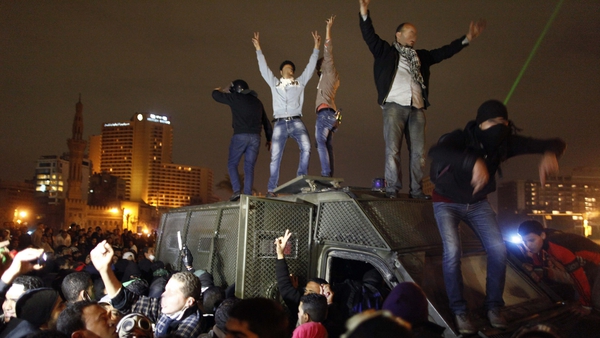 Army warns Egypt being pushed to brink of collapse