Disgraced cyclist Lance Armstrong says he received the sporting equivalent of the "death penalty" for using performance-enhancing drugs and lying about it, but he hopes his lifetime ban will one day be overturned so that he can compete again.

In the second and final part of a televised interview with U.S. talk show host Oprah Winfrey, Armstrong conceded he deserved to be punished for years of doping that helped him win a record seven Tour de France titles.

But Armstrong said the penalty he was given by the US Anti-Doping Agency (USADA) was much harsher than the sanctions dished out to other self-confessed cheats, who were given lesser sentences for testifying against him.

"I am not saying that's unfair, I'm saying it is different," he said. "I deserve to be punished but I am not sure I deserve the death penalty."

The 41-year-old said he had no ambitions to return to professional cycling but wanted to be able to compete in sanctioned events like the Chicago marathon.

"With this penalty, this punishment, I made my bed," he said. "Would I love to run the Chicago marathon when I am 50? I would love to do that but I can't."

Struggling at times to control his emotions, Armstrong admitted he was ashamed of what he had done and that he felt remorse.

He was closest to tears recalling the moment he told his children that the accusations against him were true.

"I said, 'Listen, there's been a lot questions about your dad, did I dope and did not dope? ... I want you to know that it is true'.

"I told Luke, 'Don't defend me anymore ... if anyone says anything to you do not defend, just say, hey my dad said he was sorry.'"

Lance Armstrong had earlier admitted for the first time that he cheated his way to a record seven Tour de France titles with systematic use of banned, performance-enhancing drugs.

After years of vehement denial, the confession came in the first part of a much-anticipated television interview with Oprah Winfrey.

When asked whether he had used performance-enhancing drugs, he replied "Yes".

However, he was adamant he did not dope or perform blood transfusions in 2009 or 2010, when he made his comeback to the sport.

Armstrong said the last time he doped was in 2005.

He said he will spend the rest of his life trying to win back trust and apologising to people.

The cyclist has already been banned for life, stripped of his all race wins and dumped by his sponsors.

Armstrong took questions owning up to the type of drug use that has tainted the sport he said he loves.

With cycling reeling from doping scandals and its place at the Olympics said to be under threat, Armstrong said he would do what he could, if called upon, to help rebuild its tattered image.

"I love cycling and I say that knowing that people see me as someone who disrespected the sport, the colour yellow," Armstrong said.

"If we can, and I stand on no moral platform here, if there was a truth and reconciliation commission, and I can't call for that, if they have it and I'm invited I'll be first man through the door."

When asked why he had repeatedly lied about using banned substances until now, he said: "I don't know I have a great answer.

"This is too late, probably for most people, and that's my fault. I view this situation as one big lie that I repeated a lot of times.

"It's not as if I said no and moved off it. While I've lived through this process, I know the truth. The truth isn't what I said and now it's gone."

The sport is the problem, says Paul Kimmage

Former professional cyclist and anti-doping campaigner Paul Kimmage has described Armstrong's admission as the start of a process.

Speaking on RTÉ's Morning Ireland, Mr Kimmage said Ms Winfrey failed to get to the bottom of some of the most critical issues, such as how Armstrong had got away with doping.

Mr Kimmage said that he believed the only thing that Armstrong was sorry about was that he got caught.

He added that the only service Armstrong could do for cycling was to testify under oath about his drug-taking.

Mr Kimmage said: "I don't know whether he wants to leverage that (his admission of guilt) against something else, whether he's trying to cut a deal that would enable him to compete in triathlons and that.

"If he's genuine about it he'll be knocking on (USADA Chief) Travis Tygert's door today and saying 'Okay I will testify under oath, I want to do this sport a service, I've caused it terrible damage'.

"'I know I can do it a service now. I can tell you exactly, what I did, how I did it and who enabled me to do it'. That's the only service he can do the sport now." Mr Kimmage said.

The United States Anti-Doping Agency, who exposed Armstrong as a drug taker, said in a statement that his admission was a good first step but that he needed to do more.

"Tonight, Lance Armstrong finally acknowledged that his cycling career was built on a powerful combination of doping and deceit," said Mr Tygart in a statement released shortly after the 90-minute interview was broadcast.

"His admission that he doped throughout his career is a small step in the right direction.

"But if he is sincere in his desire to correct his past mistakes, he will testify under oath about the full extent of his doping activities."

He said the UCI would welcome Armstrong in a truth and reconciliation commission for the sport.

Mr McQuaid also said Armstrong's decision to finally confront his past "is an important step forward on the long road to repairing the damage that has been caused to cycling and to restoring confidence in the sport".

The World Anti-Doping Agency (WADA) also called on Armstrong this week to reveal under oath what he knows about doping in cycling.

Due to broadcast restrictions, we are unable to bring you footage of the interview 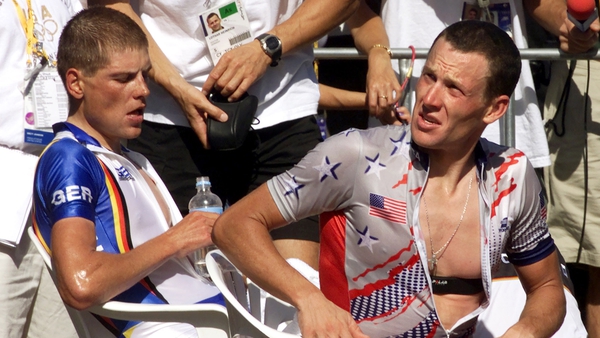