Northern Ireland First Minister Peter Robinson has said that the political process is the only way forward to deal with the ongoing violence linked to the Union flag controversy.

Mr Robinson has condemned those responsible for injuring dozens of police officers.

He said the protests had cost the local economy millions of pounds, but said protesters had become alienated.

Taoiseach Enda Kenny has said that the ongoing disturbances in Belfast are destroying the economy of Northern Ireland and the reputation of the city.

Speaking on RTE's This Week programme, Mr Kenny said the violence must not be allowed to destroy the good work done since the implementation of the Good Friday Agreement.

Senior politicians are to meet next week to discuss the Union flag protests after more than 40 days of sporadic violence.

Around 1,000 people attended a peace rally at Belfast City Hall.

Many young people and families joined the demonstration, but they pointedly stood on the pavement rather than blocking the road.

There was five minutes of noise - horns, shouting and whistling - to symbolise the silent majority speaking out and a huge round of applause ended the gathering.

Mr Baggott said the vast majority of people were grateful for their efforts as fireworks, bricks and other missiles rained down on officers on duty last night.

Elsewhere, in an interview on Sky News, Tánaiste and Minister for Foreign Affairs Eamon Gilmore condemned the recent street violence.

Mr Gilmore said he would work closely with political leaders in Northern Ireland to put a stop to the violence.

Violence broke out in east Belfast between loyalists and nationalists returning from a protest at Belfast City Hall over a council decision to restrict the flying of the Union flag there.

The groups fought each other until the police intervened.

A spokesman for one of the groups behind the protests said people should avoid demonstrations, if they need to visit places such as hospitals.

It follows an incident in Rathcoole last night during which a pensioner was blocked from getting to a hospital to visit his seriously ill wife.

Wayne Gilmore from the United Protestant Voice said disruption is inevitable during the street protests and people should bear this in mind. 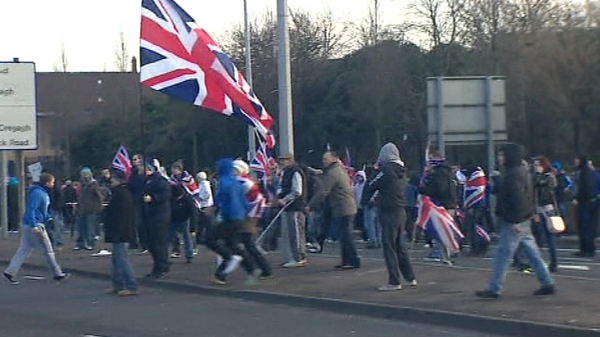