Bus Éireann plans to implement the cost-reduction measures on Sunday.

It said it has projected losses of €16m for 2013 if it does not take action to address costs.

The NBRU said that 90% of members balloted have voted to take industrial action.

The results of ballots by other unions are expected later this week.

The union, which represents over 1,100 of Bus Éireann's 2,500 employees, said the company is implementing reductions in certain payments without agreement.

Bus Éireann is seeking savings of €20m. Up to €11m in savings is to be sought in operational measures and €9m in savings from payroll.

Negotiations at the Labour Relations Commission have failed to break the deadlock.

In a letter on 14 December, Chief Executive Martin Nolan said that from next Sunday overtime rates would fall from time-and-a-half to time-and-a-quarter.

Changes are expected to shift payments, rota allowances and expenses are to be cut by a third.

Working hours are to be increased from 36 to 39 hours and annual leave and uncertified sick leave are to be altered.

Certain other changes are being negotiated either at individual grade level, or at overall CIÉ group level, as they affect staff in all three group companies - Bus Éireann, Dublin Bus and Iarnród Éireann.

The cuts that the company is proposing to implement are more moderate than those first proposed in the summer.

The unions claim that the company has not negotiated the revised proposals with them.

NBRU General Secretary Michael Faherty said Bus Éireann went over the heads of the unions in issuing that letter.

Mr Faherty said the letter contained measures that had never been presented to unions in previous negotiations and were not discussed when both sides went before the Labour Relations Commission.

He accepted that it is usual practice for a company to be given 30 days' notice ahead of any industrial action.

The union had moved as quickly as it could to ballot its members, he said, and that the results of the ballot were only available this morning.

Mr Faherty accepted that negotiations had been complex, but said that Bus Éireann will have to enter further negotiations.

He added that changes should be negotiated grade by grade, and said that had not happened to date.

However, Bus Éireann insists that there would be little point in putting the proposals to the unions.

The unions have indicated that they would not negotiate on cuts in overtime, shift rota and rest day premiums.

The company wants to refer the issues to the Labour Court, but the NBRU said it has not been given sufficient information and clarification by management to prepare a Labour Court submission.

Bus Éireann spokesperson Andrew McLindon has said that the company has not been given any official notice of industrial action by NBRU members, nor has the union made it aware of what kind of action it plans to take.

Speaking on RTÉ's News at One, Mr McLindon said there was an in-house agreement with trade unions that 30 days' notice be given ahead of any industrial action.

He said the only information the company had received about planned industrial action was what had been reported in the media. 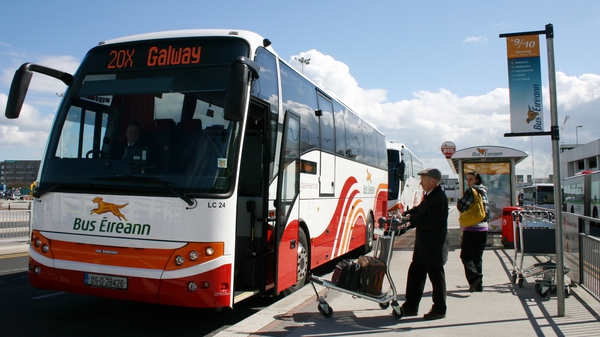