Australia is bracing for days of "catastrophic" fire and heatwave conditions.

Fires are already burning in five states as a search continued for people missing after devastating wildfires in the island state of Tasmania.

Residents told of a "fireball" that engulfed communities across the thinly-populated state at the weekend.

"The trees just exploded," local man Ashley Zanol told Australian radio, recounting a wall of flames that surrounded his truck as he carted water to assist fire crews in Murdunna.

The township was largely levelled in the inferno.

Tasmanian police said around 100 people feared missing in bushfires had been accounted for.

No deaths have so far been reported as authorities combed through still-smouldering ruins of homes and vehicles.

Bushfires were ablaze in five of Australia's six states, with 90 fires in the most populous state New South Wales, and in mountain forests around the national capital Canberra.

Severe fire conditions were forecast for tomorrow (local time), replicating those of 2009, when "Black Saturday" wildfires in Victoria state killed 173 people and caused $4.4 billion worth of damage.

A record heatwave, which began in Western Australia on 27 December and lasted eight days, was the fiercest in more than 80 years in that state and has spread east across the nation, making it the widest-ranging heatwave in more than a decade, according to the Australian Bureau of Meteorology.

The highest "catastrophic" bushfire temperature conditions are expected tomorrow, said fire officials, under which people are advised to flee if fire threatens, as the blaze is likely to be too fierce for fire crews to easily extinguish.

In the Australian capital Canberra, hit by a firestorm in 2003 that destroyed hundreds of homes, authorities said they were expecting the worst conditions in the decade since, with a fifth day of searing temperatures and strong winds.

"With those winds it boosts up the fire danger significantly," the city's deputy fire chief Michael Joyce told local reporters. Blazes sparked by weekend lightning storms were already burning in forests surrounding the sprawling lake-and-bushland city, as they did 10 years earlier.

Authorities warned earlier in the Australian summer that much of the country faced extreme fire conditions this season, after several years of cooler conditions that had aided forest growth, but also created tinder dry fire fuel conditions.

Ms Gillard warned all Australians to be alert as temperatures soared in coming days.

"We live in a country that is hot and dry, and where we sustain very destructive fires periodically, so there is always going to be risk," she told reporters.

"We do know over time that as a result of climate change we are going to see more extreme weather events and conditions." 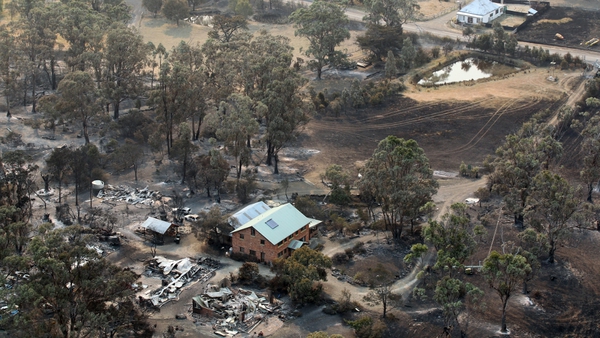