An Islamist-backed Egyptian constitution won approval in a referendum, rival camps have said, after a vote the opposition said would sow deep social divisions in the Arab world's most populous nation.

The Muslim Brotherhood, which propelled President Mohamed Mursi to power in a June election, said an unofficial tally showed 64% of voters backed the charter after two rounds of voting that ended with a final ballot yesterday.

An opposition official also said their unofficial count showed a 'yes' vote, while party spokesmen said there had been abuses during the voting.

The main opposition coalition, the National Salvation Front, responded to the defeat by saying it was moving towards forming a single political party to challenge the Islamists who have dominated the ballot box since strongman Hosni Mubarak was overthrown two years ago.

Members of the opposition, taking heart from a low turnout of about 30% of voters, pledged to keep up pressure on Mr Mursi through peaceful protests and other democratic means.

"The referendum is not the end of the road," said Khaled Dawoud, a spokesman for the National Salvation Front. "It is only the beginning of a long struggle for Egypt's future."

The referendum committee may not declare official results for the two rounds until later, after hearing appeals. If the outcome is confirmed, a parliamentary election will follow in about two months.

Mr Mursi's Islamist backers say the constitution is vital for the transition to democracy, nearly two years after Mubarak was ousted in a popular uprising. It will provide the stability needed to help a fragile economy, they say.

The constitution was "a historic opportunity to unite all national powers on the basis of mutual respect and honest dialogue for the sake of stabilising the nation," the Brotherhood said in a statement.

The opposition accuses Mr Mursi of pushing through a text that favours Islamists and ignores the rights of Christians, who make up about 10% of the population, as well as women. They say it is a recipe for further unrest.

The opposition said voting in both rounds was marred by abuses. However, an official said the overall vote favoured the charter.

"The majority is not big and the minority is not small," liberal politician Amr Hamzawy said, adding that the National Salvation Front would use "all peaceful, democratic means" such as protests to challenge the constitution.

The vote was split over two days as many judges had refused to supervise the ballot, making a single day of voting impossible.

During the build-up to the vote there were deadly protests, sparked by Mursi's decision to award himself extra powers in a 22 November decree and then to fast-track the constitutional vote.

It says the principles of sharia, Islamic law, remain the main source of legislation but adds an article to explain this. It also says Islamic authorities will be consulted on sharia - a source of concern to Christians and others.

Rights groups reported what they said were illegalities in voting procedures. They said some polling stations opened late, that Islamists illegally campaigned at some polling places, and complained of irregularities in voter registration.

However the committee overseeing the two-stage vote said its investigations showed no major irregularities in voting on 15 December, which covered about half of Egypt's 51 million voters.

About 25 million were eligible to vote in the second round.

The Brotherhood said turnout was about a third of voters.

The opposition says the constitution will stir up more trouble on the streets since it has not received sufficiently broad backing for a document that should be agreed by consensus, and raised questions about the fairness of the vote.

In the first round, the district covering most of Cairo voted "no," which opponents said showed the depth of division.

"I see more unrest," said Ahmed Said, head of the liberal Free Egyptians Party and a member of the opposition Front.

He cited "serious violations" on the first day of voting, and said anger against Mr Mursi was growing. "People are not going to accept the way they are dealing with the situation."

At least eight people were killed in protests outside the presidential palace in Cairo this month. Islamists and rivals clashed in Alexandria, the second-biggest city, on the eves of both voting days. 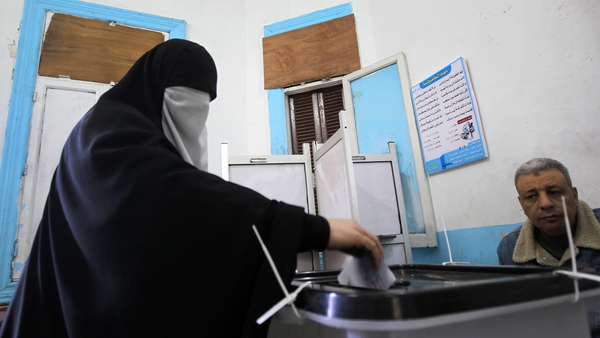 Egyptians go to the polls in referendum on constitution