A delegation from the trade union SIPTU has met senior representatives of the HSE to seek a reversal of the proposed pay cut for nurse and mid-wife graduates.

The HSE has said it intends to recruit 1,000 such personnel on 80% of the staff nurse salary, claiming that - in the current economic climate - it is the only way it could hire them.

SIPTU wants cuts instead to the €90 million that is being spent annually on hiring agency nurses.

Earlier Irish Nurses and Midwives Organisation General Secretary Liam Doran said there was no question of graduate nurses being intimidated into not taking up new contracts.

The INMO has called for a boycott of the initiative, which it describes as a "cheap labour scam".

Speaking on RTÉ's Today with Pat Kenny, Mr Doran said this call is coming directly from its members.

"I can assure that this is being driven from the bottom up, we had 40, 50 people at the press conference yesterday. They were representing classes from around the country. There isn't any intimidation going on here. They're speaking to us", Mr Doran said. 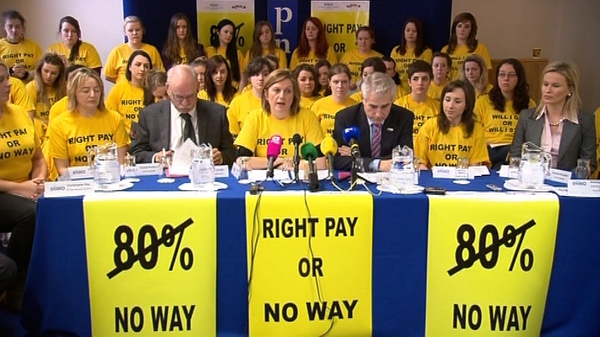