Peace campaigners in Belfast have staged a second rally to demonstrate their opposition to recent unrest.

Up to 1,000 people took part in the cross community 'Peace Gathering' in the city centre.

The hour-long event at the gates of the city hall concluded with a two-minute 'no silence' where participants whistled, shouted, clapped their hands and played musical instruments.

Organiser Paul Currie, an artist from Newtownabbey, Co Antrim, said: "The peaceful silent majority need to be heard too."

Violence erupted across Northern Ireland after Belfast City councillors voted to limit the number of days the union flag is flown.

Loyalists are opposed to any restrictions and have blocked roads and rioted over the issue.

The 'Peace Gathering' was promoted through social networking sites and had obtained permission from the Police Service of Northern Ireland.

It finished by 12pm so that shopping in the city centre would not be disrupted.

Mr Currie said: "This was a call for legal gathering of the people of Northern Ireland to show our neighbours and the world once and for all that we are not about two communities at war, but that Northern Ireland has moved on.

"Northern Ireland is about many nationalities and religions, colours and creeds living peacefully together. This is not about a flag it is about peace and freedom."

Participants of all ages waved banners and played drums but were told not to bring any flags.

A number of Belfast City councillors from the SDLP and the  Alliance Party were also at the event.

Yesterday about 200 people linked arms to form a human chain around Belfast City Hall and prayed for five minutes during the vigil.

Church leaders, including the former Methodist Church president Harold Good who oversaw the IRA decommissioning in 2005, were among those taking part.

He called for the protests over the union flag to stop.

However, a short time later traffic in Belfast was brought to a standstill when about 1,000 loyalists waving union flags and carrying banners staged another street protest.

It passed off peacefully despite concerns from police about the potential for trouble.

Almost 30 PSNI officers have been injured during disturbances over the past fortnight. More than 40 people have been arrested for public order offences. 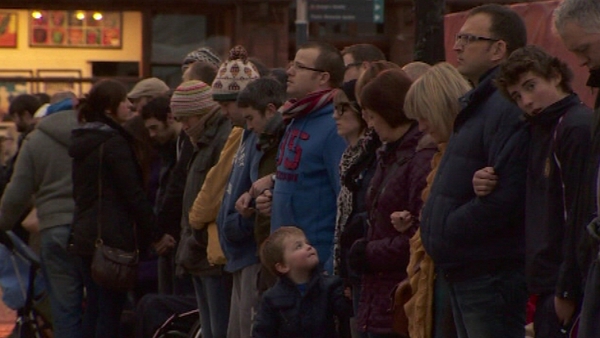