Mr Mursi's Muslim Brotherhood has said a referendum on a new constitution would go ahead as planned on 15 December.

This suggests that the climbdown by Mr Mursi may not be enough to satisfy the opposition.

Members of the Egyptian presidential national dialogue committee  recommended that a referendum on the disputed constitution be held on schedule.

Meeting today, the committee recommended that the president rescind some powers he had given himself.

The national dialogue committee meeting was boycotted by the main opposition leaders.

The statement did not suggest that President Mohammed Mursi meet demands for the 15 December vote to be cancelled.

Selim al-Awa, an Islamist at the meeting, says the committee recommended removing articles that granted Mr Mursi powers to declare emergency laws and shield him from judicial oversight.

The decision is unlikely to appease the opposition since it recommends that the referendum go ahead as scheduled.

Mr Mursi's initial declaration was to be rendered ineffective anyway after the constitution is approved.

The majority of the 54 committee members were Islamists.

Earlier, the head of Egypt's election committee said that a planned vote today by Egyptians living abroad on a controversial draft constitution has been delayed.

Egyptian Vice-President Mahmoud Mekki suggested that President Mohammed Mursi might be ready to postpone the referendum altogether, if it could be done in a legally acceptable way.

Thousands of demonstrators gathered in Cairo's Tahrir Square again overnight calling for the fall of the president and an end to what they called the end of the Muslim Brotherhood's supreme leader.

The opposition has demanded that Mr Mursi rescind the decree giving himself wide powers and delay the vote set for 15 December on a constitution drafted by an Islamist-led assembly which they say fails to meet the aspirations of all Egyptians.

The state news agency reported that the election committee had postponed the start of voting for Egyptians abroad until Wednesday, instead of today as planned.

It did not say whether this would affect the timing of voting within Egypt.

Ahmed Said, leader of the liberal Free Egyptians Party, told Reuters that delaying expatriate voting was intended to seem like a concession but would not change the opposition's stance.

The opposition organised marches converging on the palace which Republican Guard units had ringed with tanks and barbed wire on Thursday after violence between supporters and opponents of Mursi killed seven people and wounded 350.

In a speech late on Thursday, President Mursi had refused to retract his decree or cancel the referendum on the constitution, but offered talks on the way forward after the referendum.

The National Salvation Front, the main opposition coalition, said it would not join the dialogue.

The Front's coordinator, Mohamed ElBaradei, a Nobel peace laureate, dismissed the offer as "arm-twisting and imposition of a fait accompli".

Mr ElBaradei said that if Mr Mursi were to scrap the decree with which he awarded himself extra powers and postpone the referendum "he will unite the national forces".

Murad Ali, spokesman for the Muslim Brotherhood's Freedom and Justice Party, said opposition reactions were sad: "What exit to this crisis do they have other than dialogue?" he asked. 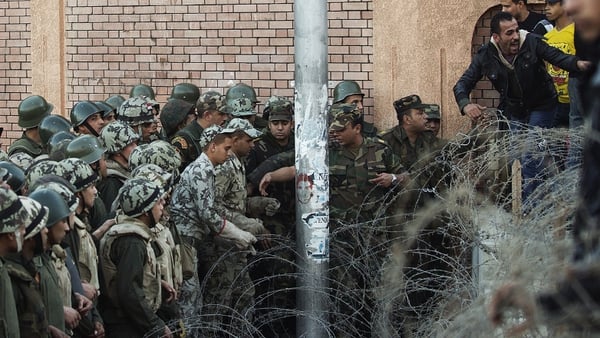