Authorities in Bangladesh have said a fire that killed 111 textile workers was sabotage, as protesters took to the streets for a second day.

The country's worst-ever industrial blaze broke out on Saturday and destroyed a multi-storey building of a Tazreen Fashions factory.

More than 150 workers were injured.

The fire has put a spotlight on global retailers that source clothes from Bangladesh, where the cost of labour is low and rights groups have called on big-brand firms to sign up to a fire safety programme.

Interior Minister Mohiuddin Khan Alamgir said according to a preliminary inquiry, the fire was the result of arson. He promised to bring the culprits to justice.

"We have come to the conclusion that it was an act of sabotage. We are finding out as of now who exactly the saboteurs are and all culprits will be brought to book," Mr Alamgir said.

Earlier, Prime Minister Sheikh Hasina said she suspected the fire was an act of sabotage, but she did not identify any suspect or say why she thought the cause might have been arson.

More than 1,000 workers, some carrying black flags, demonstrated in the Ashulia industrial belt on the outskirts of the capital where the factory is located.

They blocked traffic moving on a highway and vowed to avenge the deaths of their colleagues, witnesses said.

"Never shall we give up demands for punishment for those responsible for the tragedy," one worker said.

Bangladesh has about 4,500 garment factories and is the world's biggest exporter of clothing after China, with garments making up 80% of its $24bn annual exports.

Wal-Mart Stores Inc, the world's largest retailer, said one of its suppliers subcontracted work to the factory without authorisation and would no longer be used.

A number of other retailers, such as Gap and Nike, rushed to deny any relationship with the plant.

Hundreds of protesters, mostly from labour and rights groups, also gathered in the capital demanding to know the cause of the fire and calling for punishment of those responsible.

All of Bangladesh's garment factories closed as the nation observed a day of mourning. Flags flew at half-mast on all government buildings.

More than 300 factories near the capital shut for almost a week this year as workers demanded higher wages and better conditions.

At least 500 people have died in garment factory accidents in Bangladesh since 2006, according to fire brigade officials. 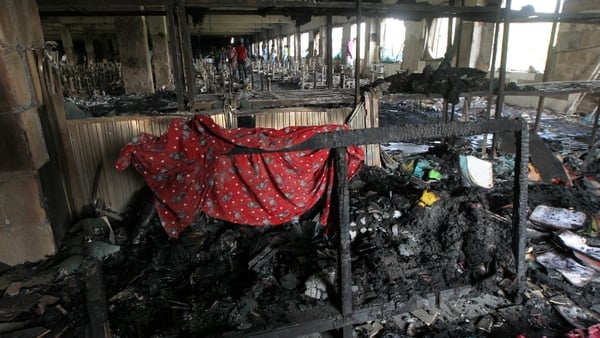