Syrian activists have said that at least eight children have been killed in a cluster-bomb attack.

Activists said the children were killed when Syrian warplanes bombed the village of Deir al-Asafir, just outside Damascus.

The village is close to suburbs of the capital that has been witnessing clashes, shelling and air raids between troops and rebels over the past months.

The Britain-based Syrian observatory for Human Rights said the bombardment of the village killed eight children.

Another activist group, the Revolution Command Council, said ten children were killed when warplanes struck the village as they played outdoors.

An amateur video showed two girls lying dead in a street while the bodies of two dead boys were in the back seat of a car parked nearby.

Several other wounded children were seen being rushed away for treatment.

Another video showed the bodies of two dead boys inside what appeared to be a makeshift hospital as others received treatment from injuries while lying on the floor.

Syria has barred most reporters from the country making it hard to verify the report.

Syria's conflict erupted in March 2011 with an uprising against Bashar al-Assad's regime, inspired by other Arab Spring revolts.

It quickly morphed into a civil war that has since killed more than 40,000 people, according to activists.

Hundreds of children have been killed since the crisis began, according to activists.

Meanwhile, Syrian war planes have attacked a rebel headquarters near the Turkish border.

Rebels fired anti-aircraft guns at the jets but they were flying too high to be hit, they said.

Syrian jets have previously bombed rebel targets along the frontier but today's strike was one of the closest to the border.

It was just 2km from a Turkish gendarme compound and near a crossing point for Syrian refugees. 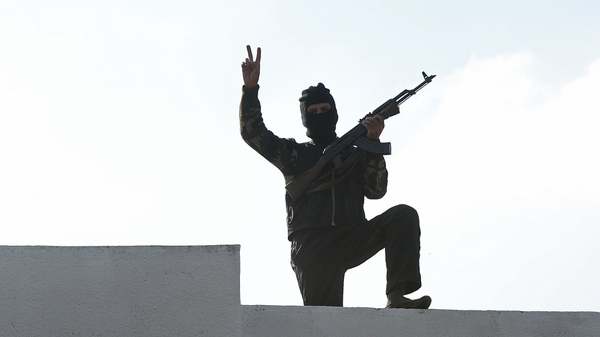