Taoiseach Enda Kenny has said that the report of the expert group on abortion will be made public after it has been brought to Cabinet.

The report of the group, chaired by Mr Justice Seán Ryan, will be before the Cabinet on Tuesday 27 November.

Mr Kenny said he will not be rushed on the issue of abortion by pressures from any side.

Speaking in Galway, Mr Kenny said the expert group's report can be discussed by the Oireachtas and "everyone else" after it is brought to Cabinet and published.

The Taoiseach said the issue of abortion had to be dealt with rationally.

Earlier, Minister for Health James Reilly said he was in favour of publishing the report.

He said he had read the 70-page report, but he wanted further time to analyse and digest it.

He said he did not think anyone would thank him or anybody else for rushing the issue or coming to the wrong conclusions, which could have "disastrous" consequences into the future.

Dr Reilly was speaking in Cork where he was addressing members of a HSE Regional Forum on his latest proposals for reform of the health service.

He reiterated the Government's determination to deal with the abortion issue, acknowledging that it had divided opinion throughout the country on several occasions.

Dr Reilly said the issue had to be addressed in a sensitive way that gave legal clarity to patients and to their doctors.

He said the aim was to ensure best practice and that the safety for patients was being observed.

Meanwhile, the Tánaiste has said the Government will deal with the issue of abortion, and said that action will not be delayed.

Eamon Gilmore said the women of Ireland are entitled to have legal clarity in a case where a woman's life is in danger and she requests a termination.

He was speaking after meeting the Indian Ambassador, to whom he expressed the heartfelt sympathy of the Irish people at the death of Savita Halappanavar. 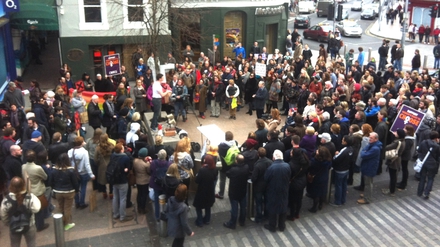 The master of the country's biggest maternity hospital said legislation on the issue of abortion is needed urgently.

Dr Sam Coulter-Smith, Master of the Rotunda Hospital, told RTÉ's Six-One that doctors want to work within the law and at the moment there is no legislation.

"Doctors want to work within the law and at the moment there is no legislation. So we need guidance," she said.

"We need help in dealing with these difficult situations, because otherwise people are at risk of working outside the law and that is not appropriate.

Up to 300 people have attended a demonstration in Cork city calling for legislation on foot of the X case.

It was organised by the Cork Pro Choice Alliance, which organised a vigil in memory of Ms Halappanavar on Wednesday night in the city.

Among the speakers were Sandra McEvoy of the Cork women's pro-choice group, Labour City Cllr Catherine Clancy, and Paul McAndrew of the Workers Solidarity Movement.

Speaker after speaker called for legislation, among them Maura Hannon of the Pro Choice Alliance, who called on people to petition their politicians for change.

'Question mark' over legislating for the X case

Fine Gael TD Michelle Mulherin has said she believes there is "a question mark" over legislating for the X case.

Speaking on RTÉ's Today with Pat Kenny, Ms Mulherin said that as a result of the X case "the law of the land" was that abortion was permitted where there is a "real and substantial risk" to the life of the mother.

She said that ultimately such a determination was a medical decision rather than one that could be legislated for.

Labour Senator Ivana Bacik said there was a real need for legislation.

Ms Mulherin suggested instead that there ought to be a decision-making mechanism, such as a medical panel in each HSE area, that would determine whether or not a termination would be appropriate and in line with the X case judgment.

Speaking on the same programme, Ms Bacik said the death of Savita Halappanavar highlighted the failure of legislators to clarify to doctors the circumstances under which the X case test may be applied.

The senator also said the 1861 Act provision should be repealed to remove the threat of criminal sanction over doctors.

Fianna Fáil Health Spokesperson Billy Kelleher said that "guilt" was a strong word to describe how he felt about previous Fianna Fáil governments' failure to act on this issue.

Mr Kelleher said that while he accepted "the Oireachtas had not dealt with it adequately," its efforts to resolve the issue were rejected by the people.

"We did try to legislate for this previously, we tried this in 2002 in the context of a constitutional amendment and legislation as well, the Protection of Human Life legislation, and that was actually defeated by the Irish people."

Ms Bacik said that the purpose of that Constitutional Referendum was not to legislate for the X case, but to remove the threat of suicide as a grounds for abortion, and that that had been rejected.

Mr Kelleher said that clarity needed to be brought to the issue.

"The point is we have yet to come up with legislation or any other solution to it and that's why we have an expert group."

Sinn Féin Health Spokesperson Caoimhghín Ó Caoláin said he believed "every cop out" is going to be explored.

He said that Sinn Féin's preference was for legislation.

HSE finalising details for inquiry into death of Savita Halappanavar