US employers increased hiring in October and a small rise in the jobless rate was due to more people recommencing looking for work.

The government also said 84,000 more jobs were created in August and September than previously estimated.

The jobless rate edged up a tenth of a point to 7.9%, but that was due to workers returning to the work force.

Only people who are looking for a job count as unemployed.

"This report is consistent with the emerging picture of an economic recovery that is continuing to regain traction after grinding to a halt earlier this year," said Millan Mulraine, an economist at TD Securities in New York.

The stronger-than-expected data was the last major report card on the economy before Tuesday's presidential election.

Polls show President Barack Obama and Republican Mitt Romney locked in a dead heat in a race in which the weak jobs market has played a central role.

Mr Romney cast the elevated jobless rate as a signal of the economy's ills. "The economy is at a virtual standstill," he said in a statement.

His top economic adviser, Glenn Hubbard, said a jobs growth figure closer to 300,000 would be needed to show an economy with real vigour.

Mr Obama said the report showed the economy moving in the right direction.

"We have made real progress," he told a rally in Hilliard, Ohio.

While the rise in the jobless rate was expected, the increase in payrolls beat even the most optimistic forecast in a Reuters poll.

Mr Bloomberg, whose city was hit hard by superstorm Sandy, said the climate is changing and that Mr Obama has taken major steps in the right direction on that issue.

The vote of confidence from the politically independent third-term mayor of America's largest city was a major boost for Mr Obama.

Both candidates had eagerly sought the backing of Mr Bloomberg, a former Republican who did not endorse a presidential candidate in 2008.

Last days of the campaign

Election day is Tuesday, and the two candidates are visiting the all-important swing states on a final campaign blitz.

Both Mr Obama and Mr Romney are pressing intense closing arguments in their race, as officials across the country reported that more than 20m Americans had already cast ballots in early voting states.

Both candidates are battling for support from the thin slice of undecided voters in nine so-called swing states.

The swing states include Florida, Virginia, North Carolina, New Hampshire, Ohio, Wisconsin, Iowa, Colorado and Nevada, where voters cannot be predicted to reliably vote for the presidential standard-bearer of either the Democrats or Republicans.

Polls show Mr Obama holds a slight lead in a majority of the battleground contests where the outcome of the vote is likely to be determined.

Swing-state Ohio has seen and will receive massive attention from both Mr Obama and Mr Romney. No Republican candidate for the White House has ever won the election without capturing Ohio.

The latest polls show Mr Obama with a slight lead there. 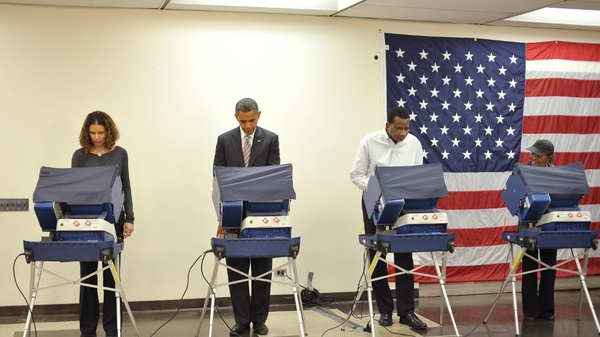