Forecasters in the US have warned that Hurricane Sandy could merge with a winter storm to generate what they have called a "Frankenstorm", as it draws near land along the east coast.

Hurricane Sandy resulted in the deaths of 41 people as it passed through the Caribbean in recent days and is expected to reach land on Monday.

Forecast models show it will have all the ingredients to change into a massive and potentially catastrophic "super storm".

Governors in states along the US east coast declared states of emergency yesterday.

Officials urged residents to stock up on food, water and batteries in the event the storm develops as forecast.

The US Navy ordered all ships in Norfolk, Virginia, including a nuclear-powered aircraft carrier, out to sea to ride out the storm.

Sandy was downgraded to a tropical storm early this morning, but has since regained its hurricane status after picking up strength in the Atlantic.

"The circulation of this storm as it approaches the coast could cover about the eastern third of the United States."

Sandy was a Category 1 hurricane as it battered the Bahamas southeast of Florida yesterday.

It is expected to crawl northward today and tomorrow and then turn towards the US coast.

The storm has the potential to cause widespread power outages and unleash flooding and even dump snow as far inland as West Virginia. It also threatens to disrupt air travel all along the US East Coast.

The storm, coming in the final weeks before the US Presidential election on 6 November, is presenting a challenge to the campaigns of US President Barack Obama and Republican challenger Mitt Romney.

Elsewhere in New York city, officials are considering shutting down the transport system, because they are worried the storm's impact could cause flooding or high winds that would endanger subways and buses. 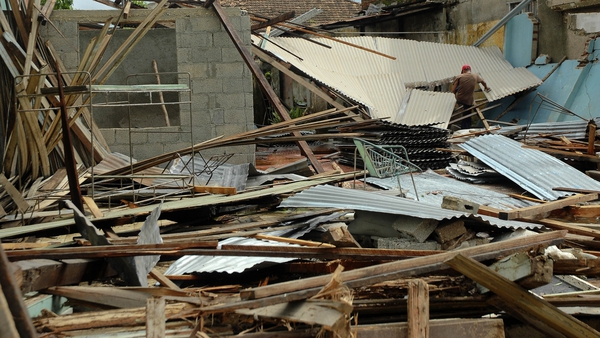