The issues of individual countries should not be used as a reason for delaying measures to agree a bank deal, Taoiseach Enda Kenny has told a meeting of European politicians.

While Mr Kenny did not name particular countries, his comments follow reservations expressed by the finance ministers of Germany, Finland and the Netherlands on a deal.

The Taoiseach repeated his call for the agreement of the 27 EU leaders on 29 June to be "carried through".

He said: "This is a very difficult time. There is no time for delay for individual country issues."

Meanwhile, EU leaders meeting in Brussels have agreed that the framework of a new pan-European banking supervision system will be in place by 1 January.

Irish Government sources have welcomed the decision as helpful to Ireland's campaign to secure a deal on its bank debt.

A new banking supervisory mechanism, run by the European Central Bank, has been a pre-condition for the EU's permaneanet bailout mechanism, the ESM, to be allowed to directly recapitalise eurozone banks.

The Taoiseach also rejected a suggestion that introducing an ECB-led regulatory regime for banks would require a treaty change.

On RTÉ's Prime Time programme, the Minister for European Affairs, Lucinda Creighton said the issue of the banking union is the main focus of the discussions and a move towards putting in place a new European bank supervisory mechanism.

Minister Creighton said that there is a need for the conclusions of the June summit to be implemented.

She said that the agreement reached in June is contingent on the setting up of a banking supervisory body, which European leaders are discussing at an EU Summit meeting tonight.

She insisted there is no reneging on the deal.

European Union leaders struck a compromise on a roadmap to establish a single bank supervisor for the euro zone after Germany and France papered over differences on priorities for overcoming the bloc's debt crisis.

The Financial Times reported that the EU Council's top legal advisor said the plans for a eurozone banking supervisor were illegal as they go beyond current powers given to the ECB.

But Mr Kenny said: "My view is that it would not require treaty change, but I'm not a constitutional lawyer."

The plans to allow the ECB to regulate eurozone banks need to proceed prior to any bank deal.

He said: "Where a decision is not followed through, that is made solemnly by the 27 leaders, market confidence in the stability of Europe is affected."

He said it was important that European citizens saw that agreements were implemented otherwise it would breed "cynicism, frustration and anger".

Mr Kenny did not speak to German Chancellor Angela Merkel at the meeting in Bucharest but plans to do so at the summit in Brussels.

She said a European currency commissioner was a possible way forward and that more European rights should be accompanied by a stronger European Parliament.

Fianna Fáil leader Micheál Martin has criticised the Taoiseach for failing to follow-up on the deal reached at June's summit by meeting the German, Dutch and Finnish prime ministers over the summer.

Mr Martin claimed there had been no contact, even by phone, with those key leaders.

He said it was important that there is some clarity about exactly what was agreed last June.

From his discussions with Dutch Prime Minister Mark Rutte in Brussels today, he said there seems to be different interpretations on the capacity of the ESM to deal with legacy issues in banks. 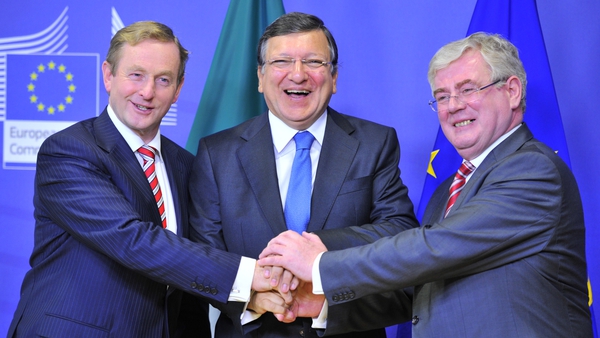