A lawyer for the families of the 32 people killed when the Costa Concordia cruise ship capsized off Italy's coast has said that no one should have died in the accident.

The comments were made as a court began to try to reconstruct the accident in a series of pre-trial hearings attended by Francesco Schettino, the captain of the wrecked vessel.

The court will decide if Mr Schettino should face a full trial, which could take place next year.

The 114,500-tonne luxury cruise ship capsized and sank on 13 January after approaching the Tuscan island of Giglio to perform a manoeuvre close to the shore known as a "salute".

It struck a rock that tore a gash in its hull and it capsized soon afterwards.

At least 30 people lost their lives during a chaotic nighttime evacuation of 4,200 passengers and crew, and a further two bodies have still not been recovered.

The ship remains sitting half-submerged on a rocky shelf off the island.

Mr Schettino has said he did make mistakes but has accused the company of mishandling the response.

He said earlier this week he was suing Costa Cruises, a unit of Carnival Corp, for unfair dismissal following the accident.

Held up to ridicule in Italy and abroad since the disaster, he faces charges of multiple manslaughter and abandoning ship. It was the first such hearing he had attended.

Lawyers representing the victims' families said they wanted to look beyond the captain, saying faulty procedures put in place by the ship's operator also needed to be exposed.

Mr Schettino did not speak during the morning's hearing but his lawyers said he accepted blame for the accident and wanted the full truth to be established.

"The captain is doing what is in his right to do, he is conducting his defence," his lawyer Francesco Pepe told reporters outside the theatre in the town of Grosseto where the closed door hearing is being held.

"It is in his interest that the truth comes out and it is a question of respect, not just for his rights but also the rights of the survivors," he said.

Eight other officers and executives of Costa Cruises, the ship's owners, are also being investigated for their roles in the accident.

The hearings will include the presentation of data taken from the ship's "black box" and an analysis of the accident by a panel of experts.

Victims' families and survivors gathered outside the hearing said they wanted those who had lost their lives to be remembered.

"What I would say to Captain Schettino is first to tell the truth and second to remember when he speaks that there are people looking at him who are still missing loved ones, people who will never be found because of what happened," said Luciano Castro, who was aboard the Costa Concordia when it capsized. 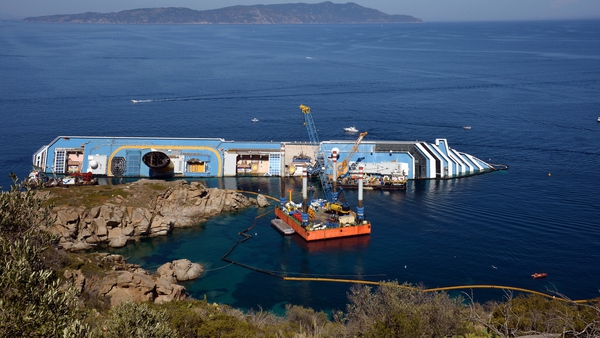