A Pakistani schoolgirl shot in the head by the Taliban has every chance of making a "good recovery", British doctors have said.

Malala Yousafzai has arrived for treatment at a hospital in central England after being shot in the head and neck for advocating education for girls in Pakistan.

She is at a unit expert in dealing with complex trauma cases that has treated hundreds of soldiers wounded in Afghanistan.

"Doctors ... believe she has a chance of making a good recovery on every level," said Dr Dave Rosser, the hospital's medical director, adding her treatment and rehabilitation could take months.

He told reporters she had not yet been assessed by British medics, but said she would not have been brought to Britain at all if the chances of her recovering were not good.

Pakistani surgeons removed a bullet from near her spinal cord during a three-hour operation the day after the attack last week, but she now needs intensive specialist follow-up care.

Dr Rosser said they could not provide any further details of her injuries without her agreement.

None of the girl's relatives accompanied her to England, but the Pakistani Consulate is providing support and her family may join her at a later date.

The schoolgirl, who had wanted to become a doctor before agreeing to her father's wishes that she strive to be a politician, has become a symbol of resistance against the Taliban's efforts to deprive girls of an education.

Pakistanis have held some protests and candlelight vigils but most government officials have refrained from publicly criticising the Taliban by name over the attack, in what critics say is a lack of resolve against extremism.

The shooting of Malala was the culmination of years of campaigning that had pitted the young girl against one of Pakistan's most ruthless Taliban commanders, Maulana Fazlullah.

Mr Fazlullah and his faction of the Pakistani Taliban took over Malala's native Swat Valley in 2009 after reaching an agreement with the government, which gave them de facto control of the former tourist spot.

He imposed the Taliban's austere version of Islam there, blowing up girls' schools and publicly executing those deemed immoral.

The army later launched a major offensive in Swat, forcing many Taliban fighters to flee.

Earlier this year, the Taliban kidnapped and beheaded 17 Pakistani soldiers in one of several cross-border raids that have become a new security headache for Pakistan.

Malala continued speaking out despite the danger and as her fame grew, the Taliban started publishing death threats in newspapers and slipped them under her door.

She ignored their threats, and the Taliban says that is why it sent assassins, despite a tribal code forbidding the killing of women.

Pakistan's interior minister said police had despatched guards to protect journalists who had been threatened by Taliban militants angered by coverage of Malala's case.

The Taliban has said it would now try to kill her father, a headmaster of a girls' school in Swat. 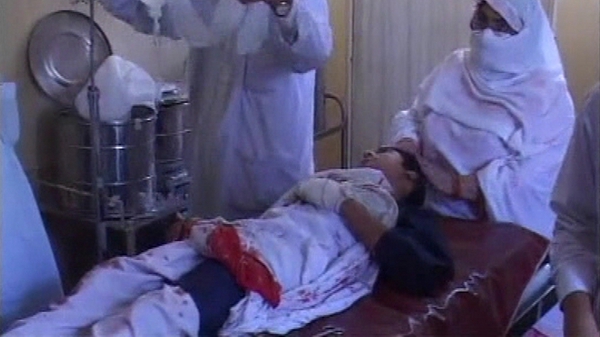