Gardaí say at least 5,000 people attended a rally in Ballyconnell, Co Cavan, in support of bankrupt businessman Seán Quinn and his family.

The rally was organised by a group called Concerned Irish Citizens.

Seán Quinn's daughter Ciara told the crowd she and her siblings were "the true and rightful owners" of the Quinn Group companies.

She said her family were "innocent parties" and that they refuse to be "scapegoats".

Ciara Quinn was highly critical of the former Anglo Irish Bank in her speech.

She said her family had always been hard-working and extremely private, but that now their lives have been torn apart.

The crowd was told that one day the "war with Anglo" would be over and that her family would still be standing.

Another daughter, Colette Quinn, briefly addressed the crowd to say the family wanted to contribute to the area again and to bring prosperity back to Cavan and Fermanagh.

Members of the Concerned Citizens of Ireland group and well-known GAA figures, including Mickey Harte and Donegal selector Rory Gallagher, appeared on stage.

Seán Quinn, his son Seán Quinn Jnr and his nephew Peter Darragh Quinn, have been before the High Court in recent months in relation to debts owed to the former Anglo Irish Bank.

Seán Quinn Jnr remains in prison in Dublin after being found to be in contempt of court.

He was jailed in July for breaching court orders, trying to stop an elaborate scheme to put up to €500m worth of property assets beyond the reach of Irish Bank Resolution Corporation, formerly Anglo Irish Bank.

Seán Quinn Jnr received a prison sentence along with his cousin Peter Darragh Quinn, who lives in Co Fermanagh and cannot be extradited to the Republic of Ireland on a civil conviction.

Seán Quinn, who was also found guilty of contempt of court in July, is due back in the High Court next Friday. 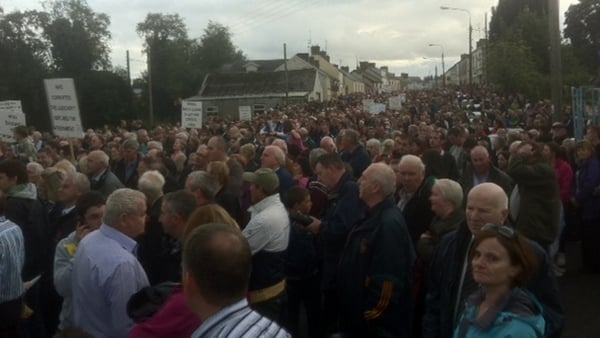 Crowds rally in support of Quinn family in Cavan