Turkish authorities ordered the Syrian Air passenger plane, which was travelling from Moscow to Damascus, to land last night after receiving an intelligence tip-off and seized some of its cargo.

Meanwhile, Russia demanded an explanation from Turkish authorities over the decision to detain the plane.

Russia's Foreign Ministry said Turkish authorities refused to grant Russian diplomatic staff access to 17 Russian citizens during the eight hours that the flight was held up.

The plane took off from the Turkish capital Ankara in the early hours of this morning.

Authorities seized some cargo from the plane, which according to Turkish state media may have included military communication equipment.

Turkish Foreign Minister Ahmet Davutoglu would not say what had been found on the plane, only that they confiscated illegal items.

A source in a Russian arms exporting agency said that no Russian weapons were on board the plane.

“Neither weapons nor any kind of systems or parts for military equipment were on board or could have been on board,” news agency Interfax quoted the source as saying on condition of anonymity.

A large bomb has exploded in an area housing security and army compounds west of Umayyad Square in central Damascus, opposition activists said.

Islamist groups Ahfad al-Rasoul and Ansar al-Islam said in a joint statement they planted bombs in a compound belonging to State Security in the area.

Witnesses said soldiers in full combat gear were deployed in the area and all roads leading to Umayyad Square were cut. 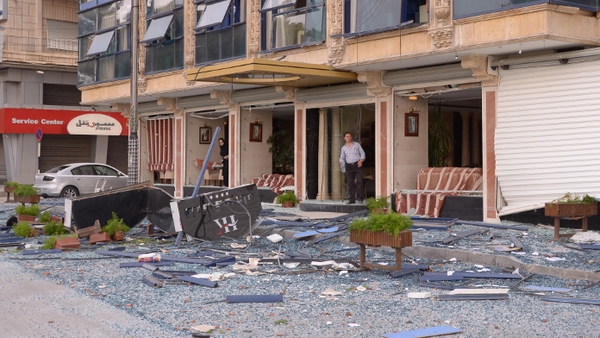