Minister for Finance Michael Noonan has said the ground rules on negotiating the Anglo promissory notes had not changed.

He was responding to remarks by ECB president Mario Draghi who said the ECB could not "print money" in order to deal with the issue.

In response to a question from Fine Gael MEP Gay Mitchell on promissory notes, Mr Draghi said: “It's too easy to think that the ECB can replace governments' action or lack of it, printing money. That's not going to happen.”

He added: “We should remember that the ECB cannot undertake monetary financing... which cannot replace what other member states should do in this.

“This is true for Ireland, it's also true for every other case in this.”

Mr Noonan said there was nothing new in the ECB's position, adding that the government was not seeking "monetary financing" by the ECB in Anglo's case.

Mr Draghi was speaking in the European Parliament in Brussels.

Leaving a meeting of EU finance ministers in Luxembourg Mr Noonan said that Ireland would not support a Financial Transactions Tax (FTT) so long as it was not supported by the UK.

He said there were 33,000 jobs in the financial services industry and some of those would be lost if Ireland introduced the tax and not Britain.

Under EU rules the tax could come into effect if at least nine countries forge ahead on the issue under the Enhanced Cooperation procedure.

The FTT would only apply, however, in those countries.

The Government is currently paying down €28bn relating to the promissory notes issued to Anglo Irish Bank.

Anglo used the promissory notes to secure Emergency Liquidity Assistance from the Central Bank, since Anglo at the time did not have the correct collateral to secure funding directly from the ECB.

Under ECB rules the money must be “paid back”, or sterilised.

This is to dissuade national central banks from printing money in a way that would pose inflationary risks to the eurozone as a whole.

It is understood the ECB is reluctant to bend the rules in the Anglo case as this might be seen as Frankfurt condoning monetary financing.

Mr Draghi's comments come as the Tánaiste is due to travel to Paris to meet his French counterpart, Laurent Fabius.

It is expected that Mr Gilmore will be raising the issue of Ireland's banking debt and how it can be placed on a sustainable footing.

The meeting comes in the run-up to a summit of EU leaders later this month where they will be expected to clarify if the EU's new bailout fund, the European Stability Mechanism, will deal with “legacy” banking debt as well as future debt.

A recent meeting of German, Dutch and Finnish Finance Ministers suggested the ESM would only deal with future debt - something which would be a significant problem for Ireland.

The Taoiseach Enda Kenny has maintained that a statement from the June leaders’ summit did mean that both legacy and future debt would be handled by the ESM.

Meanwhile, finance ministers from all 27 European Union member states met in Luxembourg to discuss moves towards a European banking union, as well as plans for a financial transactions tax.

The eurozone has been slowly moving towards closer harmonisation on several fronts, as a means to ending the EU debt crisis.

Yesterday it formally launched its permanent bailout programme, the €700 billion-strong European Stability Mechanism, while it is also moving towards an EU bank supervision regime as part of a future banking union.

However despite this, ground out through tough negotiations over the past couple of years, the economic data is not reflecting any sense of optimism.

Last night the eurogroup of eurozone finance ministers approved the next tranche of Portugal's bailout, but at a late night news conference the head of the International Monetary Fund Christine Lagarde said Greece still had to do more in order to secure the next instalment of its rescue package.

The IMF's own report, however, shows that the Greek economy will contract by a further 6% next year.

The fund has also warned that the global economy is at risk of heading back into a recession, which could be more complex than the last just one endured three years ago.

At a news conference in Luxembourg Ms Lagarde said that she appreciated the plight of people in countries living under austerity, but there was no indication of a change of course.

Tánaiste Eamon Gilmore has said that Ireland is working very closely with France in order to secure support for the Government's efforts to seal a deal on banking debt.

Mr Gilmore was speaking as he arrived at the French Ministery for Foreign Affairs in Paris for a meeting with his opposite number Laurent Fabius.

He said the Taoiseach would travel to Paris in a couple of weeks, and this was part of the ongoing Government effort to secure the maximum level of support for Ireland's position.

On today's comments by Mario Draghi, Mr Gilmore said the position articulated by the ECB President on monetary financing was 'not new' and had been 'stated before'.

He contended that what was more significant was Mr Draghi's formal statement to the European Parliament this morning, in which he said that the ECB was working with Ireland to conclude an arrangement in respect of our banking debt.

He said those discussions on the Anglo-Irish promissory notes was continuing. 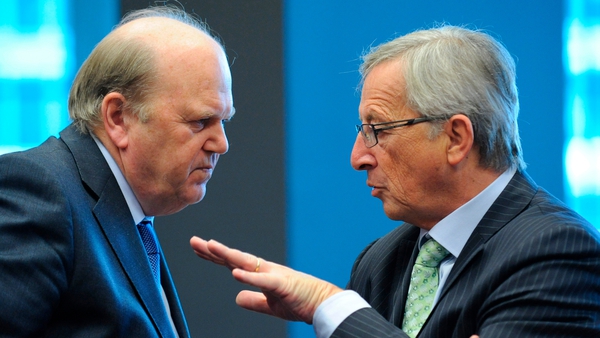