Iran's president has said his country was under constant threat of military action from "uncivilized Zionists".

Mahmoud Ahmadinejad called for a new world order not dominated by Western powers in the service of "the devil."

In his eighth and likely final address to the UN General Assembly's annual gathering of world leaders, Mr Ahmadinejad painted a gloomy picture of a world driven by greed rather than morality.

Iran's president did not reiterate his comments to journalists in New York on Monday that Israel has no roots in the Middle East and would be "eliminated."

However, he complained that nations were being forced to accept a new era of hegemony and added, in a clear reference to Israel: "Continued threat by the uncivilized Zionists to resort to military action against our great nation is a clear example of this bitter reality."

Yesterday, in his address to the General Assembly, US President Barack Obama said he would do whatever it takes to prevent Iran from getting nuclear arms, adding that there is not an unlimited amount of time to solve the matter via diplomacy.

Israel and the United States have both refused to rule out the possibility of an armed strike on Iran's nuclear facilities, which the West suspects aim to produce atomic bombs but which Tehran says are for solely peaceful purposes.

Israeli Prime Minister Benjamin Netanyahu, who is due to speak at the United Nations tomorrow, has criticized Mr Obama's position that sanctions and diplomacy should be given more time to stop Iran from acquiring nuclear weapons.

He has called for Mr Obama to spell out "red lines" that, if crossed by Iran, would trigger an attack, something the White House has so far rejected. 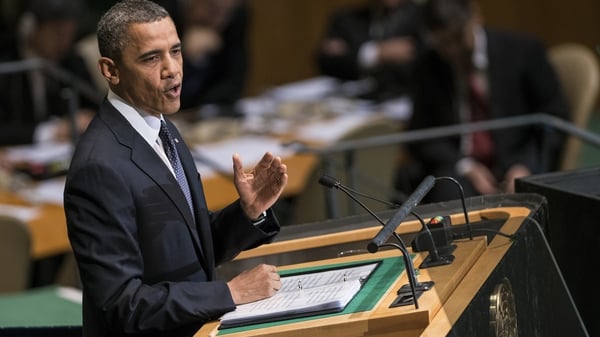