Japanese coastguard vessels armed with loudspeakers and fire hoses have closed in on a Taiwanese fishing fleet of 60 boats as it neared a disputed island group.

The islands in the East China Sea are known as Senkaku in Japan and Diaoyu in China.

Heavy seas and strong winds helped to dissipate much of the water cannon jet before it could take effect on the decks of the fishing boats.

Japanese officials said the fleet came within 12 miles of the islands, within what Japan considers to be its territorial waters.

The fleet was made of about 50 Taiwanese fishing boats and ten Taiwanese surveillance ships.

They were confronted by the Japanese coastguard vessels, with onlookers from the Chinese navy assumed to be keeping a watchful eye on the radar not far away.

The Japanese government's purchase of the islands from private owners this month has already led to sometimes violent protests in China and informal boycotts of Japanese products there.

The rival claims were the focus of talks today between China and Japan, testing whether the two countries can summon the political will to put the rancour behind them.

Taiwan also claims the islands and has registered a formal protest in Tokyo.

Japanese coastguards said six Chinese surveillance ships were also going in and out of the 24-mile zone around the islands.

"We will continue to guard the area around Senkaku attentively. Related ministries will be cooperating to gather information, and we will be fully prepared for warning and surveillance activities," said Osamu Fujimura, Japanese Chief Cabinet Secretary.

Today's was the first incursion by Taiwanese vessels since Japan's purchase, according to Japan's Kyodo News Agency.

Japanese patrol boats warned the boats to leave with electronic signboards and directives over loud speakers.

A Taiwanese surveillance ship responded that the waters belonged to Taiwan and that the boats were engaged in legitimate operations and urged the Japanese patrol boats to withdraw, Kyodo reported.

Some of the Taiwanese fishing boats displayed banners asserting Taiwan's claims to the islands. 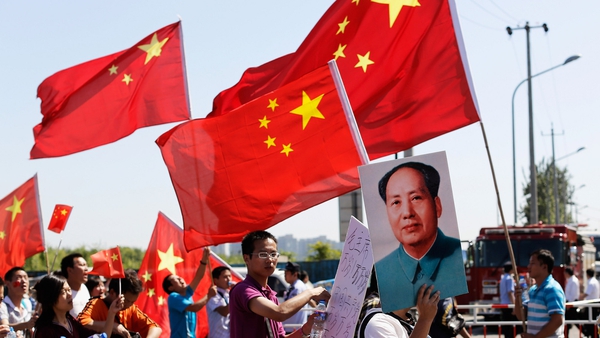