Tánaiste Eamon Gilmore has said the Labour Party "is not going to flinch" from the tough decisions ahead.

Mr Gilmore said the party was elected to do a job and it was going to carry out the job of getting Ireland out of the EU/ECB/IMF bailout.

The Labour leader was speaking to journalists before the start of his party's think-in in Maynooth, Co Kildare.

Mr Gilmore said that after five years of crisis, people are feeling worn out, frustrated and worried about what is next.

He told Labour TDs and Senators that by pushing ahead now, it means the country can exit the IMF programme and people can be confident that the series of difficult budgets has come to an end.

He said the Government was working well and had a proven capacity to deliver, with the country's reputation going from being the sick man of Europe to its most likeliest success story.

On yesterday's IMF report, Mr Gilmore said the advice it gave was similar to that offered to other countries, but that it underscored the need for Ireland to get out of the programme of support it is currently in.

He said he was confident a fair system of property taxation could be implemented, but declined to speculate on other budgetary matters, saying it was too early in the year to do so.

Meanwhile, the Minister for Public Expenditure and Reform has accepted that a property tax based on market value could create a rural-urban divide.

However, Brendan Howlin said the Government is looking at ways to make the new property tax as fair as possible.

Mr Howlin said a final decision on the tax has not been made and Government discussions are still under way.

Minister for Finance Michael Noonan yesterday rejected an IMF proposal for a property tax of 0.5% of market value.

Mr Howlin also rejected that figure and said it will be a "much less impactive tax".

When questioned about a property tax based on market value rather than site value, Mr Howlin accepted there were issues of fairness that would need to be addressed.

"There is a property tax in every other European country that I've looked at and that's what the Troika demand we put in place in here," he said.

"There will be issues of fairness that must be addressed and all of that will be addressed before we publish the details of our scheme."

Minister for Social Protection Joan Burton has said that the Government's spending on pensions and other social welfare payments represents an enormous form of economic stimulus in the domestic economy where demand is flat.

She said she did not think the IMF looked at this when it recommended reductions in the old age pension, including the merger of the contributory and non-contributory pension, in its review yesterday.

Speaking on RTÉ's News at One, Ms Burton said the review was not part of the bailout deal with the Troika, and while she would consider the IMF's opinion, the Government would be making its own decisions in the best interests of the Irish people. 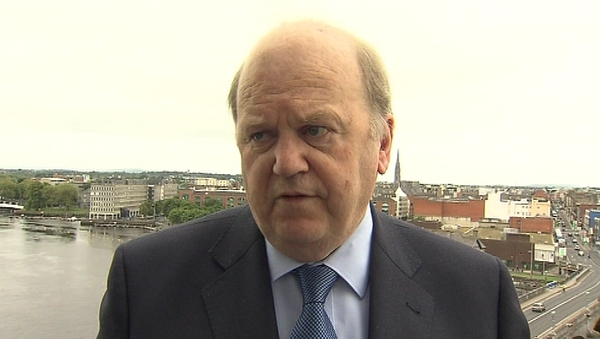