The Colombian government and FARC rebels have held exploratory talks to lay the groundwork for a fully-fledged peace process.

President Juan Manuel Santos confirmed the talks with the Revolutionary Armed Forces of Colombia in an address broadcast on state television.

Mr Santos said his forces would not halt their operations or reduce their presence while contacts were continuing.

He said he had fulfilled his "commitment to seek peace".

Mr Santos said his government would learn from the mistakes of so many previous leaders who tried but failed to clinch a lasting ceasefire with the FARC.

He also said that he knew another leftist rebel group, the National Liberation Army (ELN), was interested in being part of the process, and that he was open to their participation.

The president did not say where the discussions had taken place or who took part in them, but noted that the results of the talks would be known "in the coming days".

Earlier, Colombia's former vice president Francisco Santos said the two sides had agreed to open peace talks in the Norwegian capital Oslo on 5 October, and then continue the talks in Havana, Cuba.

Mr Santos, who is at the mid-point of his four-year term, has said he would consider peace talks with the FARC only if he was certain the drug-funded group would negotiate in good faith.

In 1988, former president Andrés Pastrana ceded a safe haven the size of Switzerland to promote talks.

The rebels took advantage of the breathing space to train fighters, build more than 25 airstrips to fly drug shipments, and set up prison camps to hold its hostages.

Founded in 1964, the Marxist-inspired FARC, Latin America's largest and longest-fighting insurgency is believed to have some 9,000 fighters, most of them hiding out in mountainous and jungle areas.

The ELN has another 2,500 fighters, according to government estimates. 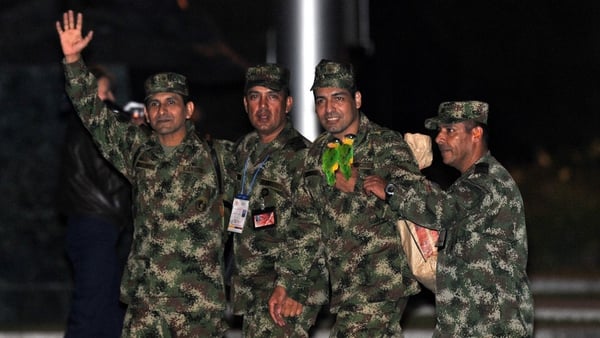