French President Francois Hollande has said that Greek leaders must demonstrate their commitment to push through reforms, adding that Europe must take decisions on the country as soon as possible.

After a meeting with Greek Prime Minister Antonis Samaras, Mr Hollande also said that Greece must stay in the eurozone.

His comments echoed those made by German Chancellor Angela Merkel, who held similar talks with Mr Samaras on Friday.

"It [Greece] must demonstrate again the credibility of its programme and the will of its leaders to go through with it to the end, whilst ensuring it's bearable for the population," Mr Hollande told reporters.

"On the European side, we are waiting for the Troika report," he said, referring to the grouping of the European Commission, European Central Bank and International Monetary Fund.

"Once we have this report, once the commitments ... are confirmed, Europe has to do what it has to do.

"We've been facing this question for two and a half years. There's no time to lose - there are commitments to reaffirm on both sides, decisions to take, and the sooner the better.

“That means after the Troika report at the European summit in October."

Mr Samaras said he had assured Mr Hollande that Greece was determined to overcome the debt crisis and remain in the eurozone, which would show that Europe was capable of solving its problems.

He said: "Some are betting that Greece will not make it. I am here to assure the French president that Greece is determined to make it and it will.

"[It will] do whatever is needed to overcome its crisis and remain in the eurozone and play the role it merits in European integration."

The Greek leader added that economic recovery was crucial to help it meet its targets.

Dr Merkel reassured Mr Samaras that she wanted Greece to stay in the eurozone, but gave no sign of ceding to his pleas for more time to meet the tough terms of Greece's international bailout.

She also stuck doggedly to her policy of deferring to the Troika report, although she did say that she and Mr Hollande were in no doubt they wanted Greece to stay in the single currency. 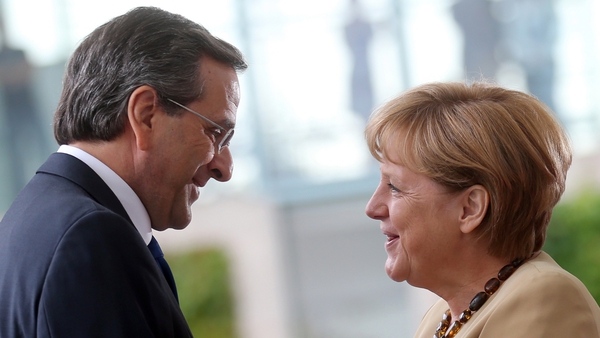