The Dublin Airport Authority is holding mediation talks with five taxi driver representatives in Dublin city centre overnight in an attempt to resolve a dispute about parking spaces.

The dispute centres on a decision by the DAA to remove 70 spaces at an overflow taxi holding area. So far there has been no resolution.

Speaking on the way into talks, David McGuinness of Tiománaí Tacsaí na hÉireann said he hoped the dispute would be resolved but he could not guarantee it.

He apologised to passengers but said they felt they had no alternative.

The independent mediator, Sheamus Sweeney, used to work at the Labour Court.

Drivers say they will not return to work until all 70 spaces are restored, because they each have paid €440 for an airport permit and are therefore entitled to a waiting space.

The DAA had offered to restore 30 of the places, but the drivers refused this offer.

Paul O'Kane of the DAA said its offer to reinstate 30 of the spaces on an interim basis was a "credible and reasonable offer" which taxi representatives seemed to accept at a meeting yesterday.

He said on the bigger issue, there is sufficient space for taxis at the airport and the DAA remains available for talks.

"We are aware of the fact that they are unhappy. We've met them three times in the last two days, so we are making every effort. We are available at any time for further talks," he said.

Speaking on RTÉ’s Morning Ireland, Jim Waldron of the National Private Hire & Taxi Association said the drivers would continue their action until the DAA reinstated the spaces.

Taxi drivers withdrew their service Wednesday afternoon and have stopped taking fares from the arrivals area because of the row, though they are still dropping passengers off in departures.

This morning around 400 taxi drivers staged a slow drive protest around the airport campus.

This caused disruption at the airport roundabout for a time and caused the DAA to stop work to reinstate the parking spots.

The dispute takes place in one of the busiest months for the airport. 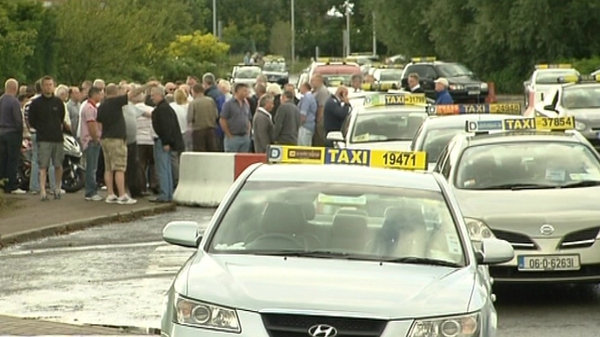