Germany and France have presented a united front towards Greece, saying it should not expect leeway on its bailout agreement unless it sticks to tough reform targets.

Mr Samaras will be in Berlin and Paris this week in the hope of persuading Europe's big powers that Greece deserves patience.

Ms Merkel stuck to her policy of deferring to a report due in September on Greek progress by the troika of international lenders before discussing flexibility on the bailout terms.

She said it was vital "that we all stay true to our commitments".

Speaking before a dinner with Mr Hollande she said: "But we will, and I will, encourage Greece to continue on its path to reform, which has demanded a lot of the Greek people."

"We want, I want, Greece to be in the euro zone, it's a desire we have expressed since the start of the crisis. It's up to the Greeks to make the effort that is essential for that goal to be met," said France's Socialist president, standing alongside Ms Merkel.

Mr Samaras has given interviews to German media stressing that while Greece may seek more time to meet the targets, it is not asking for more money.

But German Finance Minister Wolfgang Schaeuble and others seemed unconvinced.

"More time is not a solution to the problems," Mr Schaeuble said, addressing Mr Samaras' hopes that his country might be given four years instead of two to push through painful economic reforms, to alleviate the impact on the Greek people.

Mr Schaeuble said more time could also mean "more money" and Europe's help for Greece had already "gone to the limits of what is economically viable".

European leaders say any decisions on Greece will depend on the report by inspectors from the European Commission, European Central Bank and International Monetary Fund.

Mr Samaras is seeking what he calls "a bit of air to breathe" at a moment of rare optimism on financial markets that the EU and ECB are poised for decisive action on the euro debt crisis.

Behind their stern public message, Germany and France may have little choice but to show some flexibility, with little appetite in either capital for forcing Greece out of the euro zone. 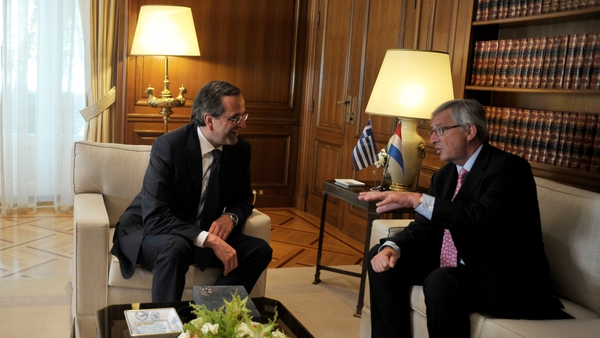