Russian police are searching for more members of the Pussy Riot punk rock band, a spokeswoman said, signalling further pressure on the group.

This is despite an international outcry over jail terms for three women who protested in a church against Vladimir Putin.

The Russian president's critics condemned the court proceeding that yielded the two-year prison sentences on Friday as part of a clampdown on a protest movement and reminiscent of show trials of dissidents in the Soviet era.

Police said they are searching for other members of the group over the February protest at Moscow's Christ the Saviour Cathedral, but had not yet identified the suspects.

Although the search was launched before Friday's verdict, the determination of police to pursue other Pussy Riot members suggested the Kremlin would keep the heat on the band despite the furore over the punishment imposed on the three young women.

"The necessary search operations are being conducted," a representative of the Moscow police told Interfax news agency.

A police spokeswoman in Moscow's central district confirmed by telephone that other, unidentified members of Pussy Riot are being sought under a criminal case that is now separate from the case against the three performers who were tried.

Nadezhda Tolokonnikova, 22, Maria Alyokhina, 24, and Yekaterina Samutsevich, 30, were convicted of hooliganism motivated by religious hatred over their performance of a "punk prayer" urging the Virgin Mary to rid Russia of Mr Putin.

The three held forth in front of the altar and wearing ski masks to conceal their identity, but were arrested after the protest.

Two others who took part remain at large and the group has said it planned further demonstrations against Mr Putin.

In an interview last week, other members of Pussy Riot, their faces hidden behind colourful ski masks like those worn during the "punk prayer", said the trial had only strengthened their resolve.

The United States, European Union and several nations have called the sentences disproportionate, and the US has urged Russian authorities to "review" the case.

Tolokonnikova, Alyokhina and Samutsevich said they had sought to protest against Mr Putin's close ties with the Russian Orthodox Church and had not set out to offend believers.

Mr Putin, an ex-KGB spy who returned to the presidency for a third term on 7 May after a four-year spell as prime minister, said before the sentences were pronounced that the women did "nothing good" but should not be judged too harshly.

They have already been in jail for about five months, meaning they will serve another 19 months and could be freed if Mr Putin were to pardon them.

The Orthodox Church hinted it would not oppose such a move by appealing, belatedly, for mercy.

Madonna joined a chorus of celebrities in denouncing the jail terms imposed on the three women. She said they were being sent to a "penal colony for ... a 40-second performance extolling their political opinions". 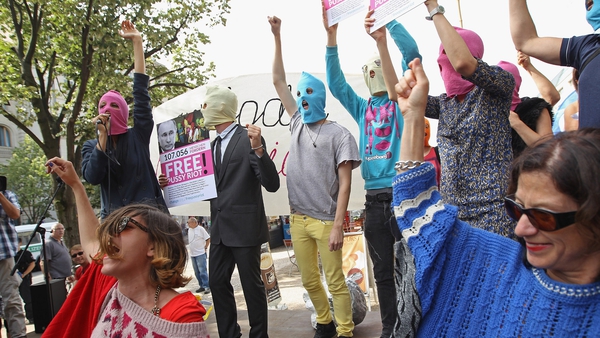