Thousands have been trapped or displaced by intensifying fighting between government and rebel forces, while hundreds of people are fleeing the country each day.

Some are wounded as they arrive in neighbouring countries, while others report having been shelled or fired on in border areas, according to the UN refugee agency.

Ms Amos, who entered Syria in a convoy from Lebanon, aims to "draw attention to the deteriorating humanitarian situation and the impact of the conflict on civilians caught up in the fighting", the UN said.

The humanitarian plight has worsened over the past month as fighting has spread to the capital Damascus and the biggest city Aleppo.

UN efforts to launch a significant aid operation in recent months have been stymied by Syrian bureaucracy and insecurity.

UN distribution networks are functioning, but a UN humanitarian appeal of $180m for Syria this year is only 40% funded so far.

Despite difficulties, Syrian Red Crescent volunteers are delivering aid to thousands of displaced in Aleppo and outlying rural areas, many of them staying in public buildings including schools, the International Committee of the Red Cross said.

Displaced Syrians are pouring into Iraq, Jordan, Lebanon and Turkey, including 10,000 who arrived in Turkey over the past four days, raising the total there to nearly 60,000, the UN High Commissioner for Refugees said.

Overall, the agency has registered 157,577 Syrian refugees but the true total is much higher as thousands have failed to come forward to register, some for fear of reprisals upon return to Syria, UNHCR spokesman Adrian Edwards said.

The US has lifted financial sanctions against former Syrian prime minister Riyad Hijab after his decision to leave  President Bashar al-Assad's government.

The decision was announced by the Treasury Department, which said that Mr Hijab would no longer be subject to US sanctions against senior Syrian officials, including a freeze on any assets he held under US jurisdiction.

Mr Hijab, a Sunni Muslim, was not in President Assad's inner circle. But as the most senior civilian official to defect, his flight after two months in the job looked embarrassing for Mr Assad.

He referred to Mr Assad's government as an "enemy of God" in his first public appearance since defecting earlier this month.

He also said Mr Assad's government is falling apart and controls only 30% of the country.

Nearly 30 senior officials in Mr Assad's government are on the US Treasury's list of persons hit with US asset freezes, including Syria's new prime minister, Wael Al-Halqi. 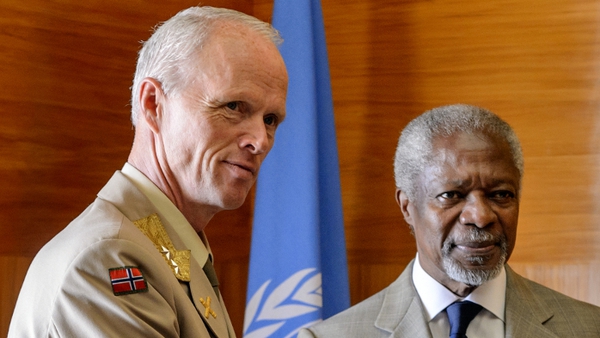