Residents of Iran's northwestern city of Tabriz faced a second night sheltering in outdoor tents as aftershocks from a 6.4 magnitude earthquake scared many away from their homes.

The death toll rose yesterday to more than 250 with entire villages levelled.

At least 20 villages were totally destroyed on Saturday in the quakes, which were followed by 36 aftershocks.

A senior government official in charge of rescue operations said more than 5,000 tents have been set up to shelter the thousands of displaced who spent the night outdoors.

State television said at least 250 died. The semi-official Mehr news agency quoted a local official who put the toll at 277.

State television also reported that 44,000 food packages and thousands of blankets have been distributed in the area.

The US Geological Survey reported that Saturday's first quake was magnitude 6.4 and struck 60km northeast of Tabriz at a depth of 9.9km.

State television quoted local crisis committee chief Khalil Saei as saying the epicentre was a region between the towns of Ahar and Haris, about 600km northwest of the capital Tehran.

The second quake was a magnitude 6.3 and struck 11 minutes later, the USGS reported.

Its epicentre was 50km northeast of Tabriz at a depth of 9.8km.

In addition to 20 villages destroyed, more than 130 others sustained heavy damage.

The aftershocks were felt in a wide region near the Caspian Sea, causing panic among the people.

Iran is located on seismic fault lines and is prone to earthquakes.

It experiences at least one earthquake every day on average, although most are so small they go unnoticed. 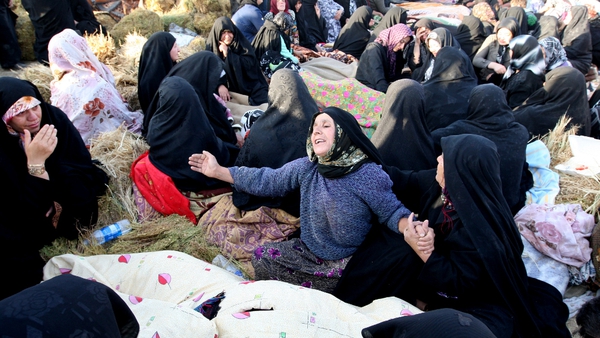