Western delegations at the UN are reportedly sceptical about the value of appointing a replacement for Kofi Annan as the UN-Arab League mediator in the escalating conflict in Syria.

When he announced his departure, Mr Annan, a former UN secretary-general and Nobel Peace Prise laureate, said he was not able to carry out his job with the UN Security Council's veto powers hopelessly deadlocked.

Russia, an ally of Syrian President Bashar al-Assad, is backing Damascus, while the United States, Britain and France are calling for Mr Assad to be replaced.

The deadlock persists, and is now complicating the question of whether UN diplomatic mediation will continue.

UN Secretary-General Ban Ki-moon said he was in discussions with Arab League chief Nabil Elaraby on a possible successor to ensure that the diplomatic track is kept open.

Russia, which expressed regret that Mr Annan chose to step down, is also determined to have someone replace Mr Annan to keep a UN-led diplomatic track open.

Other council members such as China, South Africa and Pakistan agree with Moscow.

They had grown increasingly frustrated with the veteran diplomat's refusal to step aside after it became clear that Russian President Vladimir Putin would continue to veto any attempt to impose UN sanctions on Damascus to force it to end the onslaught against an increasingly militarised opposition.

The Obama administration is instead moving, albeit cautiously, to increase its backing for anti-Assad rebels.

"The Americans gave up on the Security Council route back in October after Russia's first veto and have unenthusiastically supported the European push in New York since then," one council envoy said on condition of anonymity.

"They also feel Annan took too long to concede failure."

Asked if Washington was working on coming up with possible replacements for Mr Annan, White House spokesman Jay Carney told reporters Washington was "working with our partners, both at the United Nations and more broadly, including the 'Friends of Syria,' on a concerted effort to pressure the Assad regime."

He added they were working with the opposition to help it unify and providing it with "non-lethal aid."

After announcing he would step down on 31 August, Mr Annan said: "The increasing militarisation on the ground and the clear lack of unity in the Security Council have fundamentally changed the circumstances for the effective exercise of my role."

"While the Security Council is trapped in stalemate, so too is Syria," Mr Annan wrote in an editorial in the Financial Times.

Russia, with the aid of China, vetoed three resolutions criticising and threatening sanctions against Damascus for its 17-month attempt to use military force and heavy arms to crush an increasingly militant opposition.

One senior Western envoy said over 20,000 people have been killed by Mr Assad's forces.

Despite European public statements of support for Mr Ban's determination to replace Annan, some European diplomats privately voiced scepticism about appointing someone to a job that appears headed for failure.

"Who's going to take that job?" one council diplomat said. "If Annan couldn't succeed, who else could? It's a lost cause at the moment, though that could change in the future. Assad could fall any day and no one would be surprised."

Two envoys spoke of a possible Malaysian candidate as well.

Former Finnish President Martti Ahtisaari has also been suggested, though one diplomat told Reuters that the Finn, who was the other candidate when Mr Ban selected Mr Annan at the beginning of this year, was not among the main candidates.

Amnesty International this morning released new satellite images showing the extent of heavy weapon use in and around the Syrian cities of Aleppo and Anadan.

The organisation warned that both sides fighting in Aleppo may be held criminally accountable for their failures to protect the civilian population.

The satellite images show an increased use of heavy weaponry, including near residential areas.

Amnesty said they raise urgent concerns over the assault on the beleaguered city.

The Syrian army and rebel forces have been fighting for control of the country's largest city for more than three weeks.

The satellite images, which were analysed by Amnesty International USA and Digital Globe, were shot at the end of July in Aleppo and the nearby town of Anadan.

Some of the images reveal more than 600 probable artillery impact craters from heavy fighting between Syrian armed forces and armed opposition groups in Anadan.

An image from 31 July shows probable artillery impact craters next to what appears to be a residential housing complex in Anadan.

As fighting intensifies in populated urban areas, more and more civilians are being exposed to danger, including unlawful killings, warned Amnesty. 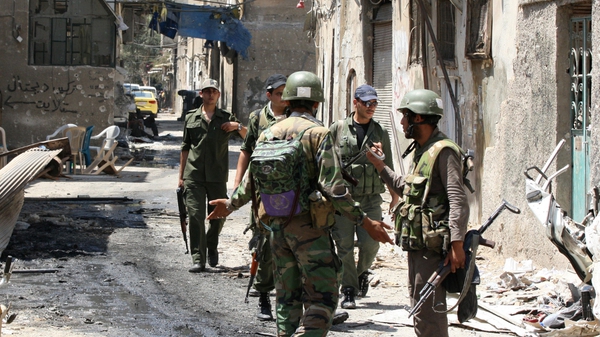