An Bord Pleanála has given the go-ahead for the Luas link up in Dublin city centre.

The Government has already announced it is committed to funding the estimated €370m cost of the project.

Initial works are due to begin next year and passenger services are planned to start in 2017.

The 6km BXD line will extend the Green Line from St Stephen's Green through the city centre where it will link up with the Red Line at the junction of O'Connell St and Abbey St.

It will then go to Broombridge near Cabra where it will link up with the Maynooth commuter rail line.

A stop is also planned for the new DIT campus at Grangegorman, a project which got approval for €180m worth of funding in the Government's stimulus package.

A number of city centre statues including Molly Malone at the bottom of Grafton St will have to be removed and kept in storage while works take place.

The board decided that the Luas BXD line would not interfere with future development of the Metro North and Underground DART projects.

It also decided to allow the line to run with overhead cables through the core city centre area despite concerns expressed by Dublin City Council that these would be "visually intrusive".

It decided that the Dawson St north bound stop be omitted as it could cause traffic congestion.

The planning permission for LUAS BXD will last for seven years.

Minister for Transport Leo Varadkar said he believes the project may cost less than the projected €370m because of An Bord Pleanála's decision to allow the line to run with overhead cables.

The minister also said it would still be possible to build Metro North and DART Underground in the future, but the LUAS extension was something the Government could afford to do now.

Mr Varadkar accepted that there would be disruption during the construction of the new line, but said lessons had been learned from the previous work done on the LUAS network.

He said: "What it means is that for the first time in our history we're going to have a fully integrated rail network in Dublin". 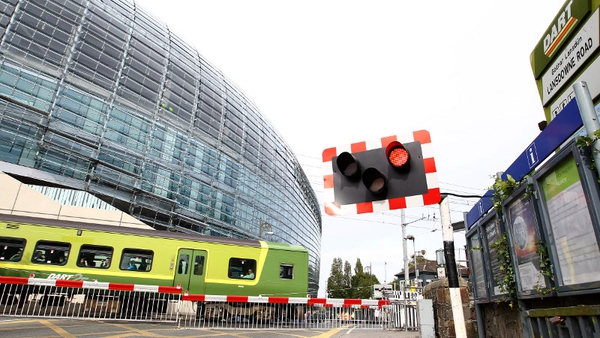