The US has raised the pressure on eurozone leaders to take decisive action on solving the region's debt crisis by lowering troubled members' borrowing costs.

US President Barack Obama said he welcomed recent declarations by European leaders and the ECB on the need to do whatever is necessary to preserve the euro.

US Treasury Secretary Timothy Geithner said the eurozone must take steps including "bringing down interest rates in the countries that are reforming".

He added that it should make sure those banking systems "can provide the credit those economies need".

Mr Hollande reassured Obama that European Union member states aimed to enact soon the decisions taken at a summit in late June, according to the French leader's office.

Germany, whose voters are deeply hostile to funding bailouts of the euro zone's weakest members, agreed in principle at the summit that the bloc's rescue funds could buy bonds of countries that are struggling to borrow on international markets.

Italy and Spain, the eurozone's third and fourth largest economies, are struggling to fund their budget deficits and debt obligations at affordable levels as bond market investors take fright.

Mr Draghi's promise last week to do whatever it takes to preserve the euro, within the ECB's mandate, stirred speculation that its Governing Council might take more radical steps at a monthly policy meeting on Thursday.

Italian Prime Minister Mario Monti said in Finland that Mr Draghi's promise was "bold and appropriate", and said European leaders were weighing joint intervention by the ECB and the eurozone's rescue funds.

He predicted that the future permanent rescue fund, the European Stability Mechanism (ESM), would "in due course" be granted a banking licence so it could tap ECB funds to buy almost unlimited amounts of bonds despite German opposition.

German Vice-Chancellor Philipp Roesler rejected pressure for the ECB to step in and cap the borrowing costs of countries in trouble, saying the central bank should stick to fighting inflation and not ease market incentives for reform.

He also reasserted Germany's firm opposition to letting the ESM borrow from the central bank, calling this "the road to an inflation union".

The Government has lodged the instruments of ratification of the European Stability Mechanism treaty with the General Secretariat of the EU Council in Brussels.

It comes after the Supreme Court ruled that the EU's permanent bailout fund is fully compatible with the Constitution.

The ruling cleared the way for the Government to deposit what are called the instruments of ratification with the General Secretariat of the EU Council.

The German Constitutional Court is expected to give its ruling on the treaty on 12 September. 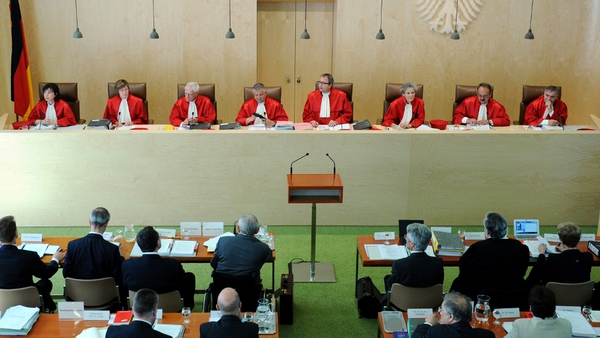