Three women who protested against Vladimir Putin in a "punk prayer" on the altar of Russia's main cathedral have gone on trial.

The trial is seen as a test of the long-time leader's treatment of dissent during a new presidential term.

The women, from the band ''Pussy Riot'', face up to seven years in prison for an unsanctioned performance if convicted.

Last February, they entered Moscow's Christ the Saviour Cathedral, ascended the altar and called on the Virgin Mary to "throw Putin out!"

Maria Alyokhina, 24, Nadezhda Tolokonnikova, 22, and Yekaterina Samutsevich, 29, were brought to Moscow's Khamovniki court for Russia's highest-profile trial since former oil tycoon Mikhail Khodorkovsky was convicted for a second time in 2010, in the same courtroom.

Supporters chanted "Girls, we're with you!" and "Victory!" as the women, each handcuffed by the wrist to a female officer, were escorted from a police van into the courthouse.

"We did not want to offend anybody," Ms Tolokonnikova said.

"Our motives were exclusively political."

The stunt was designed to highlight the close relationship between the dominant Russian Orthodox Church and former KGB officer Mr Putin, then prime minister.

Mr Putin's campaign to return to the presidency in a March election was backed clearly, if informally, by the leader of the church, Patriarch Kirill.

The protest offended many believers and left the church leadership incensed.

The church, which has enjoyed a big revival since the demise of the Communist Soviet Union in 1991 and is seeking more influence on secular life, cast the performance as part of a sinister campaign by "anti-Russian forces".

The women, who have been charged with hooliganism motivated by religious hatred or hostility, have said many times they meant no offence.

In opening statements read by a defence lawyer, they said they were protesting against Mr Kirill's political support for Mr Putin and had no animosity toward the church or the faithful.

"I have never had such feelings towards anyone in the world," Ms Tolokonnikova said in her statement, describing the charge of religious hatred as "wildly harsh".

"We are not enemies of Christianity. The opinion of Orthodox believers is important to us and we want all of them to be on our side - on the side of anti-authoritarian civil activists," she said.

"Our performance contained no aggression toward the public - only a desperate desire to change the situation in Russia for the better."

Pussy Riot burst onto the scene this winter with angry lyrics and surprise performances, including one on Red Square outside the Kremlin, that went viral on the internet.

The band members see themselves as the avant-garde of a disenchanted generation looking for creative ways to show its dissatisfaction with Mr Putin's 12-year dominance of the political landscape.

The women looked thinner and paler than they did when they were jailed following the performance in late February.

"She looks like she has been on a long hunger strike," Stanislav Samutsevich said of his daughter. 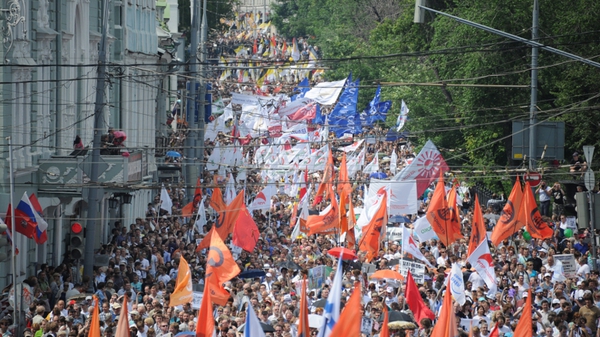