Syrian soldiers and armoured troops have pushed into a rebel-held district of Aleppo after striking back in Damascus against fighters emboldened by a bomb attack against President Bashar al-Assad's inner circle.

Activists in Aleppo, Syria's biggest city and a northern commercial hub, said hundreds of families were fleeing residential districts after the military swept into the Saladin district, which had been in rebel hands for two days.

Fighting was also reported in the densely-populated, poor neighbourhood of al-Sakhour.

An escalation in the fighting in Aleppo would prove another challenge to Mr Assad, still reeling from the assassination of four of his top security officials and a six-day attack on the capital which rebels have named "Damascus Volcano".

The president has not spoken in public since the killings, and failed to attend funeral ceremonies for his brother-in-law and two other slain officials on Friday.

The clashes in Aleppo came as UN Secretary General Ban Ki-moon said he was sending his peacekeeping chief Herve Ladsous and top military adviser Gen Babacar Gaye to Syria to assess the situation.

In Damascus, Mr Assad's forces hit back overnight. Helicopters and tanks aimed rockets, machineguns and mortars at pockets of lightly armed rebel fighters who moved through the streets on foot, attacking security installations and roadblocks.

Residents who toured the city on Saturday said it was relatively quiet, though gunfire and explosions could still be heard intermittently in some areas.

Most shops were closed and there was only light traffic - although more than in recent days. Some police checkpoints, which had been abandoned earlier in the week, were manned again.

Most petrol stations were closed, having run out of fuel, and the few that were open had huge lines of cars waiting to fill up. Residents also reported long queues at bakeries and said vegetable prices had doubled.

The Syrian Observatory for Human Rights, an opposition group which monitors the violence in the country, said 240 people had been killed across Syria on Friday, including 43 soldiers.

The Observatory's combined death toll over the past 48 hours stands at 550, making it the bloodiest two days of the 16-month-old uprising against Mr Assad.

Reports from inside Syria are difficult to corroborate due to limitations on journalists operating there.

The surge in violence has trapped millions of Syrians, turned sections of the capital into ghost towns, and sent tens of thousands of refugees fleeing to neighbouring Lebanon.

The UN Security Council has approved a 30-day extension for a ceasefire observer mission, but Secretary General Ban Ki-moon has recommended changing the focus of its work to pursuing prospects for a political solution - effectively admitting there is no truce to monitor.

A senior Syrian military defector said Assad could now rely only on an inner core of loyal army regiments, saying "the collapse of the regime is accelerating like a snowball".

But General Mustafa Sheikh also said Mr Assad's forces were transporting chemical weapons across the country for possible use against rebel forces.

"The regime has started moving its chemical stockpile and redistributing it to prepare for its use," said Mr Sheikh, citing rebel intelligence obtained in recent days.

His comments could not be verified. 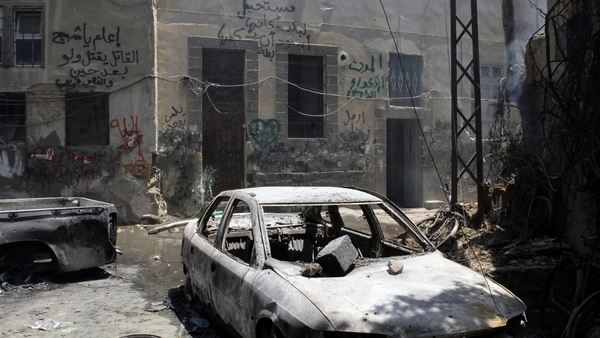