A report from the Food Safety Authority has called for calorie counts to be displayed on menus in food service outlets such as restaurants, bars and cafés.

Calories on Menus in Ireland follows a national consultation earlier this year.

Over 3,300 submissions were received by the Food Safety Authority during the consultation last February and 80% of the opinions came from consumers.

The report of the consultation, published this morning, recommends that a calorie labelling scheme should be introduced initially on a voluntary basis.

Its purpose is to enable consumers to make more informed choices when purchasing food in restaurants and takeaways.

The FSA recommends that the information regarding calories should be shown on menus and displays for all standard food and drink items.

It says it should be placed beside the price in the same prominence, and that the figure be given for portions, as well as a full meal.

The authority made its recommendation after the public consultation showed that 96% of consumers wanted the calorie labelling.

Nearly three in four food service businesses (73%) were in favour of labelling and 84% of consumers said calorie labelling of alcoholic beverages should apply in all or some outlets.

However, when considering the technical aspects of implementing it, the numbers of food businesses in favour fell to just over 50%.

Minister for Health James Reilly has said that if enough restaurants do not move to display calories on menus on a voluntary basis he will bring in legislation on the matter.

The Minister said that it was unfair that some food outlets were willing to co-operate and inform the public about the calorie content of their food, while others refuse to do so.

"We are going to continue to encourage people on a voluntary basis to join this initiative and we're going to review it at the end of the year and if I'm not satisfied that people are playing ball, particularly big chains, I'll legislate," Dr Reilly said.

"I don't think it is fair that many people like McDonalds and Subways and others are co-operating with this, and others like Burger King don't."

The FSA recommends that businesses should be provided with some assistance in implementing the scheme, such as training to calculate calories in single food portions.

Dr Flynn said concerted action between consumers and the food industry is needed to overcome the enormous threat to health posed by spiralling obesity rates.

The Irish Hotels Federation says it will oppose any attempt to introduce mandatory calorie labelling on menus in hotels and guesthouses.

Speaking on RTE's News at One, IHF President Michael Vaughan called on the minister to give restaurants until the middle of next year to come up with a voluntary system of labelling that works. 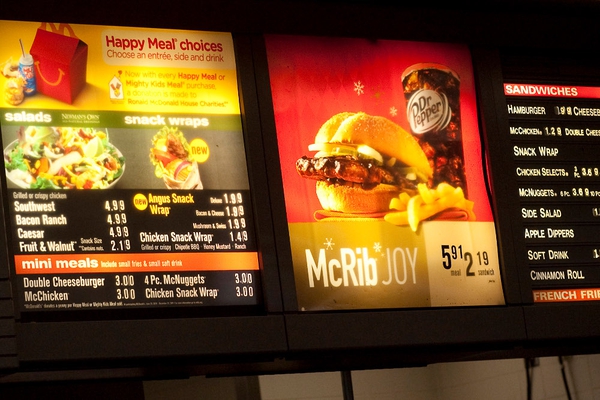 Consultation on displaying calories on menus