Minister for Finance Michael Noonan has said the EU deal on bank debt will make no difference to the Budget in December.

However, Mr Noonan said if the interest being paid on debt is reduced it will improve the budgetary position in subsequent years.

The agreement reached overnight calls for money to be sent directly to struggling banks without having to be channelled via a Government, which currently adds to a country's deficit.

Mr Noonan said it was impossible to say what the deal will be worth to Ireland.

Speaking on RTÉ's Six One, Minister Noonan said that the State's "negotiating position on the promissory notes always was that we would need a longer maturity period and a lower interest rate."

He continued, "this will relieve the burden of debt on the Irish taxpayer."

Minister Noonan said "Bank debt is 40% of Irish sovereign debt and we can see the markets pricing it in already."

Markets, he said, reacted positively today. He said the price on nine-year bonds had gone down 0.5%, while five-year bonds were down 1%.

He said that the markets would view the Irish debt position as more sustainable even before we have the mechanisms in place.

Earlier the minister said the most significant thing that has happened was that Europe has moved its policy position to breaking the vicious circle between bank debt and sovereign debt.

Details of the scheme to transfer bank debts away from the Irish sovereign balance sheet will be worked out between July and the end of this year.

In the early hours of this morning, it was Italy and Spain that blocked any agreement on a growth compact unless they secured concessions on reducing their borrowing costs.

As a result, Ireland will benefit and it should become easier to return to the bond markets.

However, bank debt will have to be repaid but a much longer time-frame will make it easier to do.

The French President Francois Hollande suggested the deal shows that the EU is now seeking to resolve the debt crisis in a much quicker fashion.

The German Chancellor emphasised that strict conditions were attached, the ECB will first be given a supervisory role for European banks; and the deal will go back to Council needing support from all countries.

The EU deal is being viewed as an example of the power of Italian Prime Minister Mario Monti.

However in a sign of how delicate things remain, he said: “While Italy doesn't plan to activate the mechanism for now, I don't exclude anything for the future."

Finance ministers will start working out the all-important detail at a meeting on Monday week.

The compact was backed by 491 votes, with 111 votes against and six abstentions, meaning Dr Merkel easily won the required constitutional two-thirds majority.

The outcome of the vote was never seriously in doubt after opposition parties agreed to back the fiscal compact in return for growth and job creation measures.

Earlier, Taoiseach Enda Kenny hailed the deal and said it would allow Ireland to re-engineer its overall debt level, which would reduce the burden on Irish taxpayers.

The new deal follows months of trenchant German opposition to the use of the European Stability Mechanism (ESM) to directly recapitalise banks.

In a statement, the EU said that eurozone leaders pledged to "examine the situation of the Irish financial sector with the view of further improving the sustainability of the well-performing adjustment programme".

EU leaders have also agreed to work towards a tighter economic and monetary union through a more centralised budget to protect the single currency from future crises.

Mr Honohan said that market conditions will continue to appear fragile until the vicious circle is broken and a more sustainable configuration of bond yields is restored.

Tánaiste Eamon Gilmore has said that the deal lifts the bank debt burden from Irish taxpayers and improves the chances of a return to the bond markets.

Mr Gilmore said he believed the deal was retrospective and would be applied to the Irish recapitalisations.

Sinn Féin President Gerry Adams said while his party firmly welcomes any positive developments that can improve the debt burden of the State, the Government is overselling the deal.

Fianna Fáil leader Micheál Martin has welcomed the deal, saying it has "significant potential" for Ireland.

Mr Martin said Ireland had "taken it on the chin" because it was ECB policy at the time for countries to take on bank debt, believing it would prevent a wider EU banking crisis.

He said that clearly has not worked and now Europe owes Ireland.

The long-term strategy report is expected to set out "four essential building blocks" for a closer union.

The four essential building blocks will include a banking union, joint budgetary decisions, deeper economic integration and a strengthening of "democratic accountability".

UCD economist Colm McCarthy has said the EU had made a clear statement that the link between bank debt and sovereign balance sheets must be broken, and this was "really important".

Mr McCarthy said Spain's misfortune had provoked measures that will be beneficial to Ireland.

Speaking on RTÉ's News at One, he said it was impossible to quantify what value any debt relief to Ireland might be, but while the deal may not resolve immediate requirements, it meant "the winning post is becoming visible in the fog". 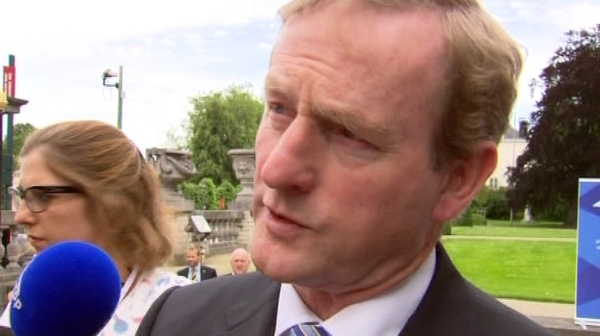