Northern Ireland's Deputy First Minister met and shook hands with the Queen at a private function in the Lyric Theatre.

They later shook hands in public as the Queen left the theatre.

He spoke to her in Irish and told her the words meant "Goodbye" and "God speed".

Mr McGuinness also shook hands with the Duke of Edinburgh.

He said he noted the Queen's comments on victims in the course of her visit to the Republic of Ireland last year and stressed the need to acknowledge the pain of all victims.

Mr McGuinness said her visit was a powerful signal that peace building required strong leadership and also praised the role of President Michael D Higgins in the peace process.

The cultural event was organised by the cross-border body Co-operation Ireland and was also attended by First Minister Peter Robinson.

President Higgins has said that the handshake between Mr McGuinness and the Queen was important in both a practical and symbolic sense.

Speaking on RTÉ's News at One, he said it recognises that the formal peace process is not a finished project, but one that had to continue.

Mr Higgins said it brought forward "the necessary generosities" that are there on both sides of the conflict.

Sinn Féin leader Gerry Adams claimed the handshake brought the journey of reconciliation on the island, and between the islands, onto a new plane.

He said further steps were needed to deal with the legacy of the conflict, and called on the British government to stop obstructing inquiries into events during the Troubles.

Asked if the Republican movement also had questions to answer, Mr Adams said he would be part of any truth commission process facilitated by the governments but run by an independent international body.

Former British prime minister Tony Blair described the meeting as a "magnificent gesture" and a sign of how much things had changed in Northern Ireland.

The event was not part of the Queen's Diamond Jubilee celebrations.

They concluded this afternoon on the grounds of the Stormont estate, where 20,000 well-wishers attended a garden party for the Queen.

Alan McBride, who lost his wife and father-in-law in the Shankill bomb in 1993, said today was hugely significant for Irish-British relations.

Mr McBride said today's handshake was another step along the road to "normalisation" in Northern Ireland, which he said is long overdue. 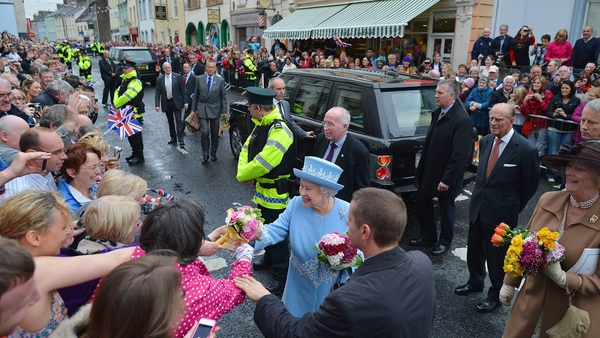