Syrian rebels today gave President Bashar al-Assad a 48-hour deadline to comply with an international peace plan, saying they would otherwise renew their battle to overthrow him.

The ultimatum was issued after UN observers reported the discovery of 13 bodies bound and shot in eastern Syria.

The latest developments emphasised how the peace plan drafted by UN-Arab League envoy Kofi Annan has failed to stem 14 months of bloodshed or bring the Syrian government and opposition to the negotiating table.

Colonel Qassim Saadeddine of the rebel Free Syrian Army said its leadership had set a deadline of 9am GMT Friday for Mr Assad to implement the peace plan, which includes a ceasefire, deployment of observers, and free access for humanitarian aid and journalists.

If it fails to do so "we are free from any commitment and we will defend and protect the civilians, their villages and their cities," Col Saadeddine said in a statement posted on social media.

Both sides in the conflict have violated a tenuous ceasefire over the past two months but Mr Assad's forces have been by far the worst offender, according to UN monitors.

Outrage at last Friday's massacre in the town of Houla led a host of Western countries to expel senior Syrian diplomats yesterday and to press Russia and China to allow tougher action by the UN Security Council.

Major-General Robert Mood, the Norwegian head of the observer mission, said the 13 corpses found today in Assukar, about 50km east of Deir al-Zor, had their hands tied behind their backs.

Some had been shot in the head from close range.

Major-General Mood called the latest killings an "appalling and inexcusable act" and appealed to all factions to end the cycle of violence.

He did not apportion any blame but Syrian activists said the victims were army defectors killed by Assad's forces.

Reports from Syria cannot be independently verified as the Syrian government has banned international media.

Earlier today, Russia said it would be "premature" for the United Nations Security Council to take new action on Syria after the killing of 108 civilians in the city of Houla.

The statement was issued a day after the US State Department said it hoped the killings would prompt a "turning point" in Russia's reluctance to take tougher action against the regime of President Bashar al-Assad.

China has also reiterated its opposition to military intervention or regime change in Syria, and called again for all sides to support mediation efforts by Mr Annan.

Japan has told the Syrian ambassador in Tokyo to leave the country as international outrage grows over the killing of civilians in Syria.

Australia, Britain, Canada, France, Germany, Italy, Spain and the United States all ordered the expulsion of the highest-ranking Syrian diplomats in their countries yesterday.

Syria's allies were reacting after French President Francois Hollande had said military intervention in Syria could not be ruled out if such a resolution were backed by the United Nations Security Council.

"It is not possible to allow Bashar al-Assad's regime to massacre its own people," Mr Hollande told France 2 television.

"Military intervention is not excluded provided it is carried out under the auspices of international law, namely via a (UN) Security Council resolution."

Mr Hollande said Moscow and Beijing were the main obstacles to the adoption of stronger sanctions against the Assad regime.

"It is down to myself and others to convince Russia and China, and also to find a solution which is not necessarily a military one," said Mr Hollande. "We should find another solution."

Mr Annan has said Syria is at a "tipping point" and he appealed to Mr al-Assad to act immediately to halt the violence.

Syria's Foreign Ministry is expelling the charge d'affaires of the Netherlands and is giving her 72 hours to leave the country, state television said.

The expulsion of the Dutch diplomat - one of the few top-level representatives of Western countries left in Damascus - follows similar steps against Syrian diplomats by a host of countries after last week's massacre in Houla.

Tánaiste Eamon Gilmore has described the ongoing crisis in Syria as "unaccepatable", adding that the blame for it lay at the feet of the Assad regime.

"The current situation in Syria is utterly unacceptable," Mr Gilmore said in a statement.

"I have made clear our outrage at the massacre in Houla on Saturday. We now know that over 100 people were killed, almost half of them children, and a large number from one extended family.

"There are also increasing indications that most of the victims were deliberately killed at close range, in addition to others killed by artillery fire.

"I welcome the unanimous statement made by the UN Security Council as well as the statement issued by the High Representative, Catherine Ashton, on behalf of the EU which clearly placed the responsibility on the Syrian military." 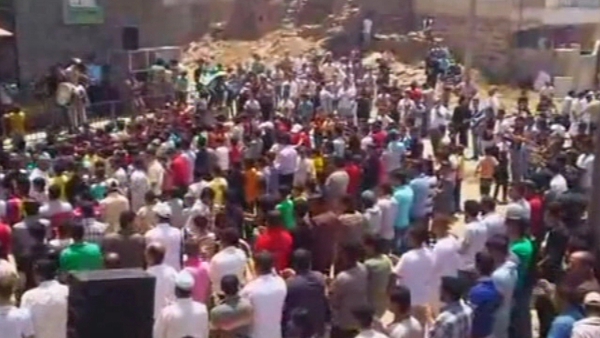