The High Court has begun hearing a challenge brought by Sinn Fein TD Pearse Doherty aimed at having the Referendum Commission withdraw remarks it made earlier this month concerning Ireland's veto over the ESM.

The action centres on a statement made by the commission’s Chairperson Mr Justice Kevin Feeney about whether or not Ireland has a veto over the European Stability Mechanism (ESM) from coming into being.

Judge Gerard Hogan says he hopes to give the ruling at 10.30am tomorrow.

The court heard that Mr Doherty has brought proceedings arising out of comments Judge Feeney made on 3 May last.

Asked if Ireland could veto the ratification of the amendment to Article 136 of the Treaty on the Functioning of the EU, he said that Ireland has "already agreed to the establishment of the ESM".

The statement added, "the Dáil and Seanad had yet to rectify the Treaty", and that "it was clear that a veto could have been exercised but Ireland has already agreed to the establishment of the ESM."

In an affidavit Mr Doherty says he is not challenging the holding of the referendum but rather the conduct of the Commission in relation to the comments made.

This statement, it is submitted by the TD, has become a matter of debate between the Yes and No sides in the fiscal treaty referendum, and the comment received a lot of attention in the media.

One of the main issues of the campaign is Ireland's ability to access funding in the event of a No vote.

The Attorney General is to be notified about the proceedings, but the High Court stressed this was more by way of courtesy than to signify any involvement of the AG in the case.

Tánaiste Eamon Gilmore has said the Referendum Commission is independent, and that Sinn Féin should recognise that independence.

Speaking to journalists after canvassing in Clontarf, Mr Gilmore said people should vote Yes for a stable Euro, investor confidence in Ireland, and access to emergency funding if required.

During his canvass, he was confronted by three single parents protesting against budget cuts.

Mr Gilmore said it was understandable that people would raise other issues during a referendum campaign, but he believed they should vote on the basis of what is in the treaty.

Voting under way on Mayo islands

Meanwhile, voting in the fiscal treaty referendum took place on the Mayo islands of Inishturk, Inishbiggle and Clare Island.

Almost 200 voters were eligible to cast their votes today on the three islands.

Voting will begin on the four Galway islands tomorrow morning.

There are over 1,000 people eligible to vote on the Aran Islands and Inisbofin. Polling stations there will be open from 7am to 10pm.

Elsewhere, Fianna Fáil made its final appeal for votes this morning - leader Micheál Martin again said ratifying the treaty was the only way for Ireland to secure long-term funding for public services.

Mr Martin said the treaty was not the answer to all of Ireland's problems, but insisted it was important for being able to access secure and affordable funding.

The Labour Party said it would continue to campaign until the close of polls at 10pm Thursday.

The United Left Alliance has claimed the result of the fiscal treaty referendum is "too close to call".

At the ULA's final news conference of the campaign, Richard Boyd Barrett said they were finding it quite hard to find Yes voters, and those they did find were doing so out of fear.

He said the result was a question of whether fear won out over the chance to reject austerity.

Mr Boyd Barrett accused the Government of "lying through their teeth" about the "so-called deficit problem".

He said the threat that the State will not have enough money to fund itself if we vote No is a "total hoax and yet another example of the lies, bullying and intimidation that has characterised the Government's campaign".

MEP Paul Murphy said a No vote would send a message to Europe that austerity does not work, and would help to defeat the treaty.

Declan Ganley said that the only reliable source of funding for the country was a return to the bond markets.

The Libertas founder said that could only be done by dealing with insolvent bank debt and proposed federalising the bank debts by sharing the costs across the European Union.

Mr Ganley also said he "wouldn't rule out" running in the European parliament elections in 2014.

A broadcasting moratorium kicks in at 2pm tomorrow. 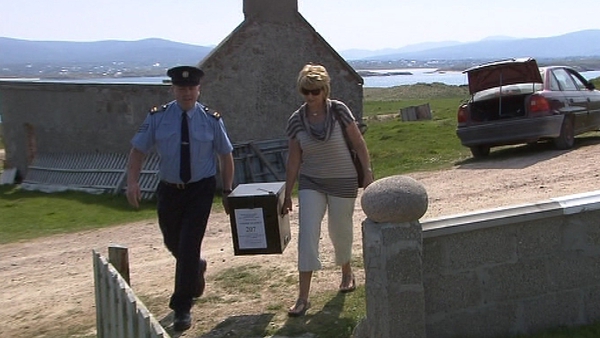