Protesters gathered overnight in Cairo's Tahrir Square demanding that the last prime minister to serve Hosni Mubarak be ousted from the second round presidential run-off.

Former air force commander Ahmed Shafiq, who has described Mr Mubarak as a role model, will face the Muslim Brotherhood's Mohamed Mursi in the run-off.

Several thousand people took to the streets across Egypt to demonstrate against the results of the election's first round, which were officially announced yesterday.

Local media reported the protest had been attacked by unknown "thugs", though the account could not be independently confirmed.

The protests have also been fuelled by accusations that there had been serious electoral violations.

These have been denied by the committee overseeing the vote.

Mr Shafiq has built a sizeable constituency with a law-and-order platform, convincing some he is the man to end 15 months of turbulence.

Mr Mursi's supporters believe he and the Brotherhood are the best hope for reforming a corrupt state.

Mr Mursi topped the poll with 24.3% of the vote, followed by Mr Shafiq with 23.3%. Turnout was 46%, according to the official results.

About half of the first-round votes went to candidates somewhere in the middle ground - from leftist Hamdeen Sabahy, third-placed with 20.4%, to moderate Islamist Abdel Moneim Abol Fotouh, with 17.2%, and former Arab League Secretary-General Amr Moussa, with 10.9%. 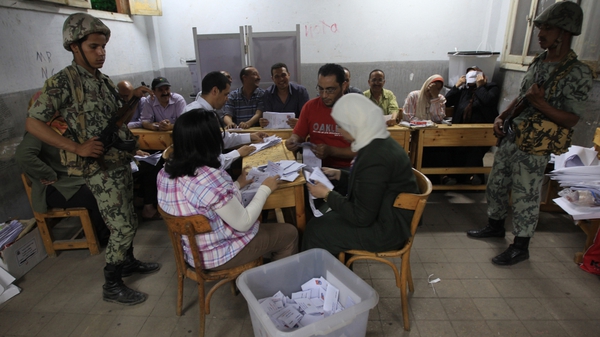