Mr Ó Broin said the terms of its establishment clearly state that funding would be available to a country to safeguard the financial stability of the eurozone.

Mr Cox, who is director of the pro-treaty group Alliance for Ireland, said the ESM treaty does include those funding arrangements.

However, he said it contains a clear statement in its preamble that a state that has not ratified the treaty by the middle of 2013 will be excluded from ESM funding.

Mr Cox claimed Sinn Féin was misrepresenting the intentions of those who drew up the ESM by telling the truth, but not the whole truth.

Minister for State Brian Hayes also insisted this morning that Ireland will not have access to emergency funding if the treaty is rejected.

He said: ''The view here, not of politicians, but of the independent Referendum Commission, is that we will not have access to this emergency fund if we do not ratify this, that's their view.

"The net issue in the campaign is this: Are we going to put ourselves out on a limb? Are we going to exclude ourselves from the possibility of funding, should we require it, at the end of our financial programme? That's a very dangerous position for people to take up."

Taoiseach Enda Kenny said he does not expect a big range of decisions to be made at Wednesday's EU summit, but said it is critical that there be a focus from EU leaders on how the growth agenda can be achieved.

Speaking in Letterkenny, Co Donegal, Mr Kenny said it was in Ireland's interest that every European country be competitive and there are opportunities for growth.

Mr Kenny said he was pleased at the way the Yes campaign was going from the point of view of the political parties in explaining what it is about and more importantly what it is not about.

Earlier, around 30 protesters heckled and booed Mr Kenny in Milford where he visited the Loreto Community School to present prizes in a competition organised by Intel.

An egg was thrown at the Taoiseach's car as he arrived at the school.

The protest involved members of the Donegal Action Against Austerity group and others opposed to the household and septic tank charges. 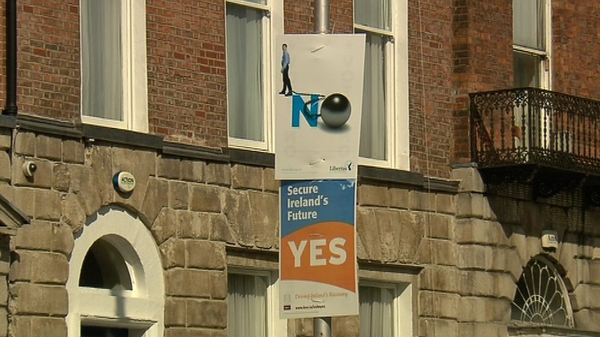