The Government insists its position is clear despite comments from Minister Richard Bruton, who indicated the Government may seek to have a second referendum on the Fiscal Treaty if it is rejected.

Asked on Today FM what the Government's ''Plan B'' was if the treaty is rejected, the minister suggested a second vote was possible.

"We will have to say we will need access to this fund and I think Ireland will be looking to say, can we vote again?'

A Government spokesperson later insisted that there would be no second vote, despite the comments.

The spokesperson told RTÉ News that the Government's position was "crystal clear" - there would be no second referendum on the treaty, whatever the result.

Mr Bruton later admitted that he did not handle the interview as well as he could have.

He said his remarks were made "in the heat of debate", but insisted the position was that there would be no second vote on the fiscal treaty.

Speaking in Co Meath, Taoiseach Enda Kenny said that there would be no second vote on the issue.

Independent TD Shane Ross earlier proposed a bill that he said would give the Government the power to postpone the referendum, "if events overtake it and they wish to avail of more time."

Deputy Ross told the Dáil the Government should take the facility, as the 17 June elections in Greece are "epoch-shaping" in terms of Europe.

He said people need clarity on the issue before making a decision.

Tánaiste Eamon Gilmore said he did not intend to accept the proposed bill.

"Changing our minds and waiting to see how the wind changes is giving a message of uncertainty to investors."

He said certainty was what was needed.

He also rejected criticism of the treaty from Sinn Féin's Pearse Doherty. Mr Gilmore claimed that what he called Sinn Féin's "fairytale economics" would result in more austerity and drive Ireland in the direction of Greece.

Meanwhile, the new French finance minister has said France will not ratify the fiscal treaty unless it is amended to include ambitious commitments to promote economic growth.

A new opinion poll on the fiscal treaty referendum suggests support for the referendum is highest among Fine Gael supporters, while Sinn Féin supporters are most opposed.

Only 59% of Labour supporters say they will vote for the treaty.

Millward Brown Lansdowne conducted the poll for the Irish Independent among 1,000 adults across all constituencies on Monday and Tuesday.

The results show 37% of those polled say they will vote Yes, with 24% voting No.

35% do not know how they will vote, while another 4% say they will not vote.

Support for the treaty is highest among Fine Gael supporters, at 85%, and is also strong among Fianna Fáil supporters at 72%.

Sinn Féin supporters are strongly opposed to the treaty, with 81% saying they will vote No.

Supporters of independents and others are split 50/50 on what way they will vote.

Minister for Public Expenditure & Reform Brendan Howlin said the poll showed that the breakdown of support nationally was reflected in the Labour Party.

He said there is a significant young and female cohort among those who remain undecided, many of whom are Labour voters.

He said the Government was taking nothing for granted, and knows it has to engage with more vigour in the final two weeks of the campaign.

He said a Yes vote was in Ireland's interests, to provide stability, and certainty to investors in a very volatile international situation.

He said a No vote was "a step into the unknown".

He said there were two weeks to go and people were only starting to engage.

"The job for the No side is to convince people that if they are suffering as a result of austerity, they should not agree to put austerity into national law by ratifying the treaty."

Mr Doherty said the No side had a job of work to do, but that they could win the referendum.

Fianna Fáil leader Micheál Martin said the 35% figure for ''don't knows'' reflected a failure to get the message out on the Government and the Yes side.

He said despite the majority the poll showed in favour of the measure, the referendum was by no means a foregone conclusion and politicians would have to work harder than ever in the remaining weeks. 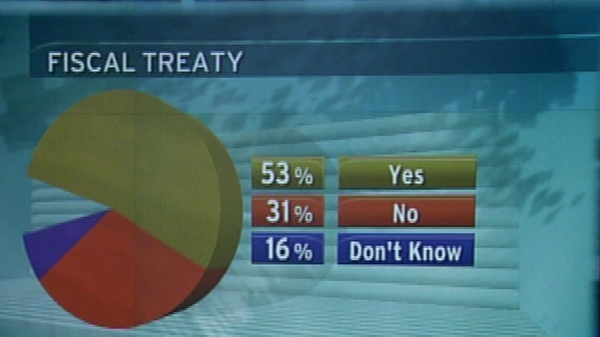